To Blair or not to Blair... 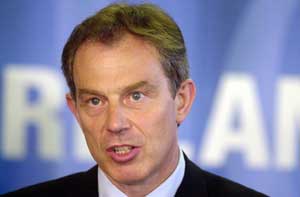 It seemed for most of last week that the most important issue in the entire world was whether Tony Blair and his Chancellor Gordon Brown are best mates.

The answer is obviously no, but never mind Iraq, Sudan, Congo, Ethiopia or even Ireland, the Labour Party, and the media, were convulsed with what someone memorably labelled 'the teebeegeebees'. What really concerned them all was the minutiae of Tony and Gordon's relationship; the body language, the secret deal — or is it deals — the 'coup' of Blair announcing his intention to fulfil an entire third Labour term whilst Gordon was safely out of the county. Then of course, there was the whole other issue of Blair's health and the speculation about whether we were being told the whole story.

Meanwhile, in the Six Counties, an attempt to achieve democracy is failing by the day, British intelligence misdemeanours continue unabated, the low growl of loyalism is constantly heard, and more tales of collusion come slithering to the surface. So, given all that, does, or should it, matter to us whether Tony Blair remains leader of his party? Well, yes and no.

Yes, because Blair was the first British prime minister to actually devote any serious time and effort into a political resolution of the conflict in the Six Counties. Yes, because he was the first British prime minister to publicly acknowledge Sinn Féin's electoral mandate and negotiate directly with the party. Yes, because as British prime minister and in possession of a large parliamentary majority, he could, and damn well should, finally implement the Good Friday Agreement in full. Yes, because if he had the political will, it is entirely within his power to rein in the DUP and simply put and end to their increasingly outlandish demands. And yes, because on his word the Six Counties could be free of the blight of a British Army presence, not because of external military imperatives and illegal adventures elsewhere in the world, but because that was what was promised under the Good Friday Agreement.

On the other hand, however, no, actually it doesn't matter all that much whether or not Blair carries on for another year, five years or whatever, or whether Gordon or indeed anyone else were to take over. It doesn't matter because, as well as fruitlessly attempting to assuage Unionist paranoia, he meant it when he said that he is a Unionist and that he believes the Union will exist for the length of his lifetime and the next generation.

If that really is the case, then it is of little consequence to us who occupies Number 10. It doesn't matter because under Blair's leadership, devolved power is not working, the Assembly is in stasis and the people of the Six Counties — all of them — have been disenfranchised. It doesn't matter because he has, throughout his participation in the Peace Process, consistently legitimised the silliest of Unionist demands and bad behaviour, failed to deal firmly with its obstinacy or confront even the worst manifestations of its instinct for supremacism.

It doesn't matter because Blair is so thoroughly morally compromised over the invasion and occupation of Iraq. Not only was he prepared to break international law, he was prepared to dissemble to his parliament, his country and the world in order to disguise and justify the illegality, but he also had no hesitation in disregarding the clearly expressed wish of the people, who marched in their millions in opposition to the war. Never again will he be in a position to preach to others about democracy and the use of force and neither will anyone have to listen when he does. And if he is prepared to ride roughshod over his own people to the cost of thousands of Iraqi lives, imagine what he would be prepared to do to nationalists in the North of Ireland.

And finally, no it doesn't matter because the nationalist and republican community in the end does not need to depend on Tony Blair to further its own ambitions and ideals. Why? Because during the whole of his next term in office and beyond whichever government which comes after, Sinn Féin's electoral mandate will inexorably keep on increasing, North and South, to the point where no leader of any Irish or British Government — not even a Conservative one — could credibly refuse to negotiate with its leadership.

The future of the Six Counties does not just lie within the power of a British prime minister.