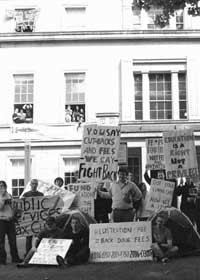 THE reality of Ireland's two-tier education system was in full view this week as thousands of Leaving Certificate students have received exam results and many are anxiously waiting the allocation of college and university places.

Issues of literacy, fee-paying schools and an all pervasive grinds culture highlighted an education system in crisis.

Noel Dempsey, the Fianna Fáil Minister, has been in the thick of the debate, with ideas and promises including a new five-year €2.5 billion school modernisation programme but it is clear that the issues facing the education system run much deeper than Dempsey or others in the coalition government are willing to acknowledge. In fact, Dempsey's own words have shown that a form of educational apartheid is evolving in Ireland today.

These children cannot read or write without assistance and by sixth class, 25% of children in these disadvantaged schools will not be able to cope with the demands of secondary school.

The government response is to introduce standard literacy and mathematical tests at primary level, but Education minister Dempsey has committed no new funds to this problem. He did point up the €500 million being spent by his department on tackling disadvantage but failed to mention that Fianna Fáil in coalition have consistently dragged their heels on tackling educational disadvantage.

The Irish National Teachers Organisation (INTO) has challenged Dempsey's interpretation of the problem. Austin Corcoran, INTO President said that, "The report shows three times the need in these schools. The challenge for the Minister is to provide three times the resources."

Corcoran also said that, "developed countries spend in excess of 6% of GDP on education whereas Ireland spends 4.4%". The lack of spending at primary level was also highlighted by Corcoran, who said that only €40 million was being spent to tackle primary level disadvantage, and that, "many disadvantaged schools had between 10% and 20% of staff with no teaching qualification".

The 26 Counties is supposed to have a free second-level education system, with students throughout the state learning the same curriculum with similarly qualified teachers doing the same exams. It is supposed to be a republican meritocracy, an educational level playing pitch.

A survey by Student Enrichment Services, a educational training organisation found that 70% of leaving certificate students are receiving grinds. It means that parents have to find money for these extra classes but the trends towards private education does not end there.

There has been a trend, especially in Dublin, of increased enrolments at fee-paying schools, with free schools having vacant places.

Crowe believes that "the really serious concern here is the gaping divide between the haves and have-nots of our society.

"Minister Dempsey claims to support an egalitarian society — surely the education system is the place to sow the seeds for this? Yet we have overcrowded classrooms at primary level, one in three children attending disadvantaged schools and huge literacy problems. Many children go to school hungry, and their parents struggle to pay for uniforms and books."

Speaking on radio, Dempsey said; "I think that our public system when you take it out of the geographic location of South Dublin does stand up well to scrutiny and opposed to fee paying schools."

This is as close to admitting that educational apartheid exists on the island of Ireland as any government has got in recent years. The minister has admitted that there is a two-tier education system in the 26 Counties, one where thousands of deprived disadvantaged students have only €40 million for their educational needs, while those who can pay thousands of euro annually for education get an €85 million subsidy.

Next week, the CAO offers of college places will be published and another cycle of educational inequality will be complete, because those students with literacy issues at primary level now will make up, no doubt, the 20% of second level students who don't complete a leaving or junior certificate and won't be in the running for a college place. They will be ignored and looked over for another year.

Noel Dempsey is also planning to unveil a €2.5 billion school modernisation programme. One method of funding it is to encourage the holders of special savings investment accounts to invest their money in it when these schemes come on line in 2006.

It is ironic that €2.5 billion is just how much money the government will end up spending to subsidise this scheme. It is in the end all about choices, and this government have chosen again and again policies that promote inequality.

It is sad that as Thomas Davis' anniversary approaches in September, it is not a case of "Educate that you may be free", but that free education is now second class to those whose wealth can buy them a better quality of learning and opportunity.