How Irish is RTÉ? 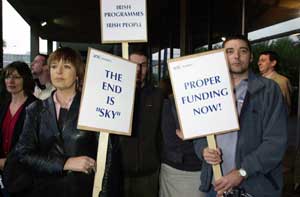 CHRIS ROWLAND argues that the state broadcaster is failing badly in its duty to deliver quality home-produced programming and offers his idea of what is needed to remedy the situation.

RTÉ is in a bad way these days. Irish content has been reduced to just 34.2% across both RTÉ1 and Network 2 (now back to calling itself RTÉ2) and tends to be vapid imitation of British staples (there's a soap that might as well be titled 'Coronation Street, Dublin 24', Fair City, and a slew of low quality game shows). Celebrity Farm was a particularly humiliating low point.

Furthermore, RTÉ is haemorrhaging funding - it lost over €20 million in 2002 alone. That wouldn't be so bad if the corporation was spending its money on quality Irish programming, but turn on either RTÉ1 or RTÉ2 any time of the day and you'll most likely be confronted by programmes that have already been shown on British television that week (see above) or sub-Sky American imports. Only 47.1% of peak time programming is Irish made, compared to 60.5% Australian-made in Australia and 90% Canadian-made in Canada.

Worst of all, RTÉ obtains its funding from a licence fee (€152) and on-screen advertising (on-screen commercial advertising on a so-called public broadcaster, I ask you) - yet it spends this money on importing British programmes that have already been transmitted in Ireland on BBC or UTV and is still losing money.

How RTÉ manages to lose the amounts it does when you consider that Australia's public broadcaster, ABC, manages to make a surplus despite having to broadcast mostly Australian content without a licence fee or advertising and has 7.6 million sq km of land mass to ensure a signal over (RTÉ only has to broadcast over 68.9 thousand sq km) is a question that needs to be answered in the Dáil.

Ireland's population cannot support two RTÉ channels, hence the predominance of cheap filler and the perceived necessity for advertising and an operating loss. One option for RTÉ would be the immediate abolition of the pointless filler channel RTÉ2 and the consolidation of all Irish content onto the remaining channel. RTÉ2's broadcast space could then be auctioned under a scheme similar to Channel 4 in Britain. Channel 4 is a commercial broadcaster, but it has strict content guidelines in its Charter requiring it to focus on minority interests and domestic production. SBS in Australia runs along the same lines, and both channels have audience shares of between five and ten percent in their markets. Profits from the auction of the RTÉ2 broadcast space could be put in a fund for the new channel, to provide a revenue stream for the first few year or so, and to stimulate Irish programme production.

In this context, abolition of the licence fee (which I believe falls hardest on those least able to pay and is hardly justifiable if Irish content does not dominate Irish television) and its replacement with direct government grants to RTÉ (as in Australia with ABC, where there is no licence fee and the broadcaster is fully government-funded) becomes important. I would also like to see the abolition of on-screen commercial advertising on RTÉ - only the PDs would see no contradiction in a so-called 'national broadcaster' flogging British newspapers and toilet roll.

Abolition of the licence fee would return €152 per annum to each Irish household, which would then go and spend the saving on goods and services which fall under VAT, so the government would be making money to pass on to RTÉ. Passing a law demanding 51% Irish content on both public and commercial Irish television would reduce the amount spent on bought-in fillers. Spending the savings on domestic production - thereby creating a substantial Irish home production industry with more jobs, more content for RTÉ, more tax revenue and consequently more funding - is also necessary. It isn't difficult to run a viable public broadcaster in the black and without recourse to advertising or already-transmitted British filler.

Canada, for example, is particular edgy about what it considers 'cultural sovereignty', due to its proximity to its obese southern neighbour, but I would argue Ireland is at greater risk. When the Irish state broadcaster is filling its schedules with British content in peak time, one has to be worried, and you only have to glance around at the number of Irish children in Manchester United or Arsenal tops in Dublin (and everywhere else) to see that anglicisation is still a very real threat in Ireland today, and one that the national broadcaster should be doing everything to counteract.