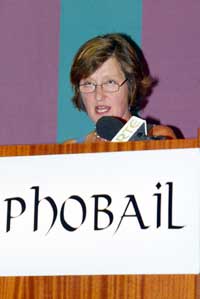 The covert killing of Irish people by the British state was a recurring theme during this year's festival. During the annual commemoration of Internment rally, hundreds of relatives of the victims of state collusion carried photographs of those who were murdered while calling for the British state to tell the truth about its involvement in the killings.

On the eve of the rally, Geraldine Finucane, the widow of murdered Belfast defence lawyer Pat Finucane, delivered her first public address about British collusion in Ireland at the PJ McGrory Memorial Lecture. Speaking to a packed hall at St Mary's College, Geraldine described the 'Long Road to the Truth' journeyed by the Finucane family in their continued determination to expose the truth about Pat's murder.

"My family and I will not stop travelling the road we have embarked upon until a fully independent public judicial inquiry into the murder of Pat Finucane is established," said Geraldine.

"It seems, however, that the closer we get to the establishment of that public inquiry, the further away it is. It is a strange situation to be in where something you have worked for becomes more difficult to achieve the closer you get to it," she said.

"I would like to compare the journey to climbing a mountain. The progress you make at the bottom of the mountain is quick because the ground is well trodden and the climb is not so steep.

"But as you progress up the slope and you get further away from familiar ground, the going gets tougher and the terrain steeper. The air is thinner and easy paths are more difficult to find. When you close in on the summit, progress can be slow, as each step requires more and more effort.

"The journey towards the establishment of a public inquiry into Pat's murder is the mountain we have had to climb. The difficulty of the terrain is the resistance of the British state. Our summit, of course, is the truth."

Detailing the circumstances of her husband's killing, Geraldine Finucane cited the role of British Minister Douglas Hogg, who had "slurred the reputations of working solicitors" and highlighted the intelligence provided by the British Army to the UDA through its Force Research Unit agent, Brian Nelson. This mechanism allowed loyalist assassins to be "more effective in targeting people" in the interests of British occupation.

The appearance of a high-ranking British Army officer, the FRU commanding officer Brigadier Gordon Kerr, during Nelson's trial to mitigate the sentence imposed upon him, is an indication that collusion was a policy pursed from the very top of the British military and political establishment.

"The appearance of Kerr was approved at high levels within the British political and army establishments, just as the activities of the FRU were sanctioned and approved," said Geraldine. "After Kerr gave his evidence, he received a letter from General Sir John Wilsey, General Officer Commanding, Headquarters Northern Ireland," said Geraldine.

The letter from Wilsey to Kerr ran, 'I cannot let your most sensible and effective contribution on 29 January go without congratulating you most warmly. Not only did you more than honour your commitment to Nelson but you also served the Army's and I judge, national interests, extremely well.'

Geraldine also noted part of John Stevens' most recent report. "My family and I have not cooperated with John Stevens but I think part of his report is worth quoting here, if only because it is so forceful in its simplicity," she said.

Stevens' highlighted collusion in a number of ways, including 'the wilful failure to keep records, the absence of accountability, the withholding of intelligence and evidence and the extreme of agents being involved in murder'. Stevens concluded that 'these serious acts and omissions have meant that people have been killed or seriously injured'.

Commenting, Geraldine said: "When Sir John Stevens quoted this statement aloud in Belfast on 17 April 2003, he set the case of Pat Finucane apart from all the others and changed something fundamentally about the fabric of the place in which we all live. This happened not just because of what he actually said but also because of what his statement represented.

"In delivering even the briefest of summaries of his full report, the Commissioner of the London Metropolitan Police in Britain was saying in plain and unmistakable language, that collusion had happened. It was real.

"The murder of Pat Finucane is not about the killing of one man. It is a documented example of a British Government policy in action, state-sponsored murder," said Geraldine.

Geraldine outlined the legal battles mounted by her family to force the British into keeping their promise. "When the reports were eventually published on 1 April 2004, the version of the report by Judge Cory on Pat's case was the most heavily censored of all."

Geraldine pointed out that in an accompanying speech made by the British Secretary of State Paul Murphy, "no commitment to a public inquiry into the killing of Pat was given and none has been offered since".

"I have spent the last 15 years fighting to expose the truth behind the murder of my husband. I believe that the truth will remain hidden until a fully independent public judicial inquiry is established to investigate all the circumstances.

"The legacy of Pat Finucane will not be diminished for as long as one person demands the truth. It is this, the continuation of this work, this vocation, this ideal, that brings us together this afternoon in memory of Pat Finucane," said Geraldine.