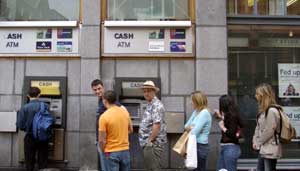 Money comes first, that is the message this summer. Money comes before jobs, worker safety, before your right to housing. Money is the easy option, whether it means being a private or public sector employer or even being in government. Whether saving or spending it money is, it seems, everything.

This week, the growing dispute at Brinks Allied, the cash-in-transit security firm; the IDA's plans to exploit the US tax code; the issue of affordable housing; and government spending plans all show that we are not just a society that measures everything in monetary values but that some of us put money before anything else.

Your money or your life

Two weeks ago, Brinks Allied, one of the 26 Counties' largest cash-moving security firms, unveiled a new fleet of security vehicles. The company's operations director, Alan Jordan, said at the time that he shared Garda fears that someone would get killed if the recent spate of robberies was not stopped.

The new Brinks Allied vehicles, with strengthened security features along with new staff selection, training and security procedures, would "ensure that every possible angle is covered in regard to reducing opportunity and minimising risk to staff".

Since then, the workers and management have been involved in a stand-off, culminating in a lock-out. On Wednesday, workers voted for strike by a margin of 60 to 9. Should the dstrike go ahead next Thursday, 19 August, the action will close all operations at the firm.

The new procedures that the company wanted to implement involved van drivers leaving a threatened colleague at the scene of a robbery. The Brinks Allied workers, who are SIPTU members, refused to operate the new procedures but were prepared to keep working and negotiate a solution.

All of this was happening against a backdrop where, in 2003, there were eight armed attacks on Brinks Allied staff. This total was already reached in the first six months of 2004.

We have heard nothing from the banks, who are the customers receiving this money, on what they think are the SIPTU workers' concerns.

It leaves the question as to where workers have arrived in the 21st century. Can it be true that they are negotiating the value of their safety and their lives, as against the value of money?

Finally, it is worth mentioning that the Irish taxpayer has shelled out nearly €20 million on Garda and army escorts for cash to banks over the past five years. The average cost of moving this money to the state is €2,800 per shipment, yet the banks, some of the most profitable companies in Ireland, are only paying €1,200 per escort.

In recent weeks, there has been a lot of discussion about enterprise and job creation in Ireland and particularly in the 26 Counties. The need for investment in infrastructure, for new emphasis on research and development, on encouraging entrepreneurs and focusing what often is very small amounts of money on encouraging new business start ups, were all identified as key concerns.

Well, enter the IDA with their latest plan. It involves none of the above strategies but instead a plan to capitalise on the needs of US companies looking for tax havens. The pay-off for the Irish economy is that it could create jobs in tax consultancy and banking, as people need to be hired to run these tax avoidance schemes.

US multinationals are allowed defer payment of tax on profits if this money is used for investment purposes. Formerly, this was done through the Cayman Islands. Now that the Cayman Islands are fast becoming an unacceptable haven, enter Ireland, an EU state with low taxes and generous tax laws.

While no one would begrudge the jobs this sleight of hand might create, there is no escaping that the jobs are dependant not on Irish enterprise or creativity but on the whim of another state's laws and the needs of multinationals there.

Where is the ingenuity from the IDA, the Department of Finance and indeed the government to show the same innovation and verve in helping small Irish firms with something practical like speculative venture capital?

It seems you have to have a pile of money already before the IDA and the coalition government are interested in you.

A house for life

"You won't get anything for €200,000 in this county", This was an opinion offered by Bernie O'Reilly, a senior executive officer with Dún Laoghaire-Rathdown County Council, which was launching an "affordable housing" scheme, with prices from €200,000 to €345,000.

This is the council's first foray into affordable housing, with prices that would be out of the reach of many households but which are symptomatic of the plight facing prospective home buyers. That is, that one of Dublin's four councils is too expensive to move into.

Given that the average price of a house in Dublin is over €300,000, it is hard to clearly see where the affordable element in this scheme is.

House prices are still rising, albeit it less than previous years. Bank of Ireland chief economist Dan McLaughlin has predicted that the annual increase for 2004 is likely to be around 6%.

This won't come as much solace to the thousands of families waiting for housing or those about to take that first step on the property ladder. A house is the largest single item anyone will buy, but this year the message is still that for many people, they will have to keep waiting. If you don't have the money, you won't be housed.

Unemployment figures were published for both the Six and 26 Counties this week. Both sets of figures increased, with the 26-County Live Register rising by 8,549 people to 177,501, while in the Six Counties 40,000 people are unemployed, a slight rise on the previous quarter.

Even when seasonal adjustments are taken into account in the 26 Counties, there was still a rise of 2,900 in the jobless figures.

What this means is people who in the coming weeks have a lot less money, won't be able to even consider buying a house, or may be worrying about meeting the payments on the one they have.

They won't be thinking about tax loopholes or the Cayman Island havens. They will be wondering if anyone has their interests at heart and is actively working to help them. The message is that if you haven't got the money, don't hold your breath.

In the midst of all this are press leaks about increased tax revenue and a new increase in government spending but with no sign that the lesson of cost overruns and misspent funds of previous years has been learnt. No, it seems that once again the focus is to be happy about the millions of extra funding but don't question if it was spent fairly or efficiently.