Collins and Boland: heroes or villains? 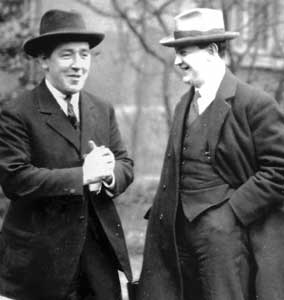 Unravelling the historical conundrum that is Michael Collins and the legacy that he and others of that time bequeathed to us rumbles on and featured in a lunchtime debate as part of West Belfast's Féile.

The debate, titled Heroes or Villains, looked at Collins and Harry Boland, another very important figure in the IRA leadership of that time, and the respective roles they played in the independence struggle.

The relevance of the debate, which is almost a century old, was reflected in the fact that over 100 people were turned away because the venue, The White Fort, was packed.

Not surprisingly, most interest centred around Collins, his thoughts and actions. Harry Boland is not well known and little has been written about him.

In fact, interest in Boland is probably due to the 1990s film about Collins, which features him and places him in a contested love triangle with Collins for the affections of Kitty Kiernan, who was loved by both men.

But it was the love for Ireland and not Kitty Kiernan that thrust Collins and Boland together as leaders of the IRA.

The great what ifs?

Last week's debate went over the ground that has been well travelled over the last nearly 90 years. What if there had been no Civil War; what if Collins had lived; what shape Ireland today?

Other questions also surfaced. Were they republicans? Why so little interest in partition and the plight of northern nationalists and Catholics and so much in the 'Oath of Allegiance'. Did they have an economic vision; a social conscience?

David Fitzpatrick, who has just written a book about Harry Boland, posed a question I've never come across and that is whether both men were democrats or elitists; their loyalty not to the will of the people but the will of the 'Irish Republican Brotherhood'.

I thought Frank Costello's presentation of Michael Collins as a 'fighter and a mediator' was a fair and accurate enough description of him. He also described him as a 'consolidator', a 'what we have we hold' approach to the events unfolding back then.

To reinforce this last point, interestingly, Costello used a letter from Collins sent to one of his comrades in which he quotes from the actions of the leader of the Russian revolution, Lenin, who had to give away a huge part of Russia to Germany to hold onto to an area under the control of the revolutionaries.

What I thought was less convincing and historically questionable was Costello's description of Collins as a 'nation builder', given his advocacy of the Treaty, which dismembered the Irish nation.

However, it has also to be said that Costello is not an historian, He is a north American living in Belfast and specialises in giving political and economic advice to potential investors from the US.

Fitzpatrick, on the other hand, is an historian and teaches history at Trinity College Dublin.

He knows his subject very well. He said that Boland was an IRB man who took his orders from them and knew the mind of the IRB better than Collins did.

Like Collins, he accepted the 'temporary partition' of Ireland as it was described during the Treaty debates in the Dáil but sided with de Valera over the oath of allegiance to the British King.

He shared Costello's argument that the strategic view at the time was to take ground and regain lost ground later on.

He had a social conscience and played a big part in mediating between Sinn Féin and the Labour Party.

He used his mediation skills to help bring about the electoral pact between Collins and de Valera.

Whether they were democrats is irrelevant

I found it strange that Fitzpatrick put a lot of emphasis on his belief that both Boland and Collins were not 'democrats but elitists', that their loyalty was to an elite body the IRB, some 3,000 strong and that they were guided by what they would 'accept' and not what the Irish people or their elected representatives would accept.

It seems to me to be entirely irrelevant whether Collins or Boland were democrats.

How could they be given that Ireland was under military occupation by the British crown and had been for hundreds of years?

The political culture of the times in Ireland was shaped by the British Government's denial of democracy even in the limited form that existed at that time.

It is not surprising that both men's first loyalty was to the IRB or, for that matter, the leadership of the IRA; they were members of both and soldiers first, not politicians.

Neither is it surprising to find that they didn't trust the people's instincts.

The will of the electorate in such circumstances is the last port of call for a revolutionary pledged to the overthrow of occupation by military means.

That is the lesson of history and it is entirely understandable because no one votes for war.

As to whether Collins and Boland were 'heroes or villains', their advocates thought they were a bit of both.

I'm not so sure that today's republicans would have such a benign view of Collins.