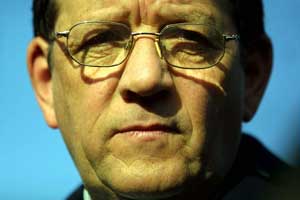 "The challenge throughout the negotiations that led up to the historic signing of the Good Friday Agreement in 1998 and in the many negotiations since is to build new and lasting relationships between the peoples of Ireland and Britain. Those relationships must be based on trust and they must be based on justice. However, as I am sure that you are well aware, the signing of the Good Friday Agreement in 1998 was a high water mark in terms of moving the process forward.

"Since then, the British Government has introduced legislation that undermines the very nature of that Agreement. It has put the political institutions into cold storage. It has even interfered with fundamental aspects of the democratic process by postponing elections and introducing electoral legislation that, whatever the intent, has disenfranchised over 200,000 people.

"The best way to secure all of our futures is for the British to make a new strategic alliance with Irish nationalism and republicanism. Unionism's future, and this is at the core of the Good Friday Agreement, is with the rest of the people of Ireland in terms freely entered into by all of us.

"London's refusal to deal properly with the issue of collusion between the British state and unionism is of particular significance. The British Government's handling of the Human Rights Commission and equality issues also goes to the heart of this issue and in many ways is the clearest example of what the appeasement of unionism has led to.

"All of these matters taken together have sent a very bad signal about the prospects of agreement in September. The reality is that the securocrats are back in the ascendancy. And the British Government is very dependent on them.

"Sinn Féin considers the realisation of the right of the Irish people to national self-determination as our primary political objective.

"Self-determination is a nation's exercise of the political freedom to determine its own economic, social and cultural development, without external influence and without partial or total disruption of the national unity or territorial integrity. Ireland today clearly does not have this freedom, nor does the pretext for partition hold good against these criteria.

"The right of the Irish people, as a whole, to national self-determination is supported by universally recognised principles of international law. The Good Friday Agreement has not changed or diminished that right.

"An internal six-county arrangement cannot work. There has to be fundamental constitutional and political change. The partition of Ireland has failed. The political settlements imposed by the Act of Union 1800 and the Government of Ireland Act 1920 have failed the people of Ireland and the people of these islands. They have failed the fundamental test of providing lasting peace and stability. Instead there has been division, inequality and conflict."