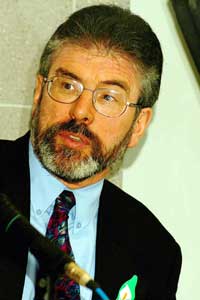 The two governments generally describe the outstanding issues in the 'stalled' political process as 'paramilitarism and powersharing'. Of course they, or at least the British Government, don't mean paramilitarism. They mean the IRA. In most cases that is the focus of the media as well. The various unionist armed groups and their sponsors in the British crown forces are usually given a bye ball.

The unionist position on powersharing, adopted by the two governments, appears to make the rights of everyone on this island who voted for the Agreement conditional on what the IRA does! Certainly the British Government and the DUP are at one on this (and at variance with the Good Friday Agreement).

Whatever little difference there may be with the Irish Government is lost because of the Taoiseach's insistence that he will not share power with Sinn Féin, thus providing a ready argument for unionists. This is an academic issue in any case because of Sinn Féin's opposition to the punitive effects of the government's social and economic policies.

But are these the only two outstanding issues? No. There are a number of other outstanding matters. As the September talks approach, let's look at what has to be accomplished if the process is to be given new life.

The DUP and the British Government have made the issue of the IRA a precondition for the re-establishment of the political institutions. The DUP has gone further and demanded changes in the political institutions. It seems to me to be a reasonable assumption that the British Government will want to facilitate the DUP. That appears to be the NIO's position. But to do as the DUP have publicly demanded would mean fundamental changes in the Good Friday Agreement. This is totally unacceptable.

What then of the other outstanding matters? Policing is a major element. For this reason, I believe that policing could be the spine of any understanding reached during the September talks. Does this mean that Sinn Féin is ready to support the current policing arrangements? No. But if the outstanding issues around policing, which are mainly about achieving civic policing and democratic control of policing, are dealt with, as I believe they can be, then I would be prepared to go to our Ard Chomhairle to ask for a special Ard Fheis to discuss this matter.

There should be no underestimation of the scale of shift in republican and nationalist thinking for Sinn Féin to be involved in policing, not only because of the emotions involved, not only because of the nationalist experience of policing in the north, but also because our country is still partitioned. For this reason, the transfer of powers on policing and justice away from London to Belfast within a short timeframe is crucial. This would put policing and justice firmly within the accountability mechanisms of the Good Friday Agreement. The British have agreed in principle to this but the details have yet to be worked out and unionist agreement is also necessary even before republicans could consider this option.

It is also my view that this issue is too big for Sinn Féin alone. A move by Sinn Féin on policing would be a bigger strategic compromise for us than the Good Friday Agreement. So it requires the involvement of those who have suffered most from decades of bad partisan policing. If, as a result of further change in policing, Sinn Féin gets to a point where the party decides to review our position, there would need to be a process of consultation with nationalist and republican communities throughout the Six Counties. What chance of these citizens taking, or tolerating or supporting, an uncharted course on this issue if plastic bullets are still in use? Or if the British government continues to condone collusion and continues to protect human rights abusers, by refusing, for example, to allow the type of inquiry that the family of Pat Finucane are campaigning for?

The malign hand of elements of the NIO is obvious on many of these issues which, six years after the Agreement, should have been completed. This includes establishing an effective Human Rights Commission, demilitarisation and a range of issues that need to be resolved if there is to be equality and parity of esteem for all citizens. These include the right to live free from sectarian harassment.

Finally, there are other outstanding matters in both jurisdictions, which the governments are publicly committed to resolving as part of previous efforts to anchor the process. The refusal, not least of the Irish government to do this despite republicans, and particularly the IRA, keeping their commitments is a real difficulty. Delivery by both London and Dublin on these issues will not only have to be part of any future comprehensive and holistic package, but their place in the sequence is also crucial.

So there is a mountain to climb, an Everest to be conquered, if the September talks are to be successful. In my view, that is not an impossible task. It will have to be conquered sometime. Why not now?

Some of my recent public remarks are aimed at republicans and nationalists, as well as the unionists, but I hope the two governments are listening as well. Our negotiating team have spelt all of this out to them. It will be folly if the two governments fail, once again, to fulfil their publicly and oft stated intentions to bring outstanding matters to completion.

It may be, at this time, that unionism is not up to pulling its weight and fulfilling its obligations. Fair enough. Time will tell. If that be the case, and I hope that it is not, then there will be no return to the political institutions in the short term.

But the Good Friday Agreement is about more than that. Most of it is about rights. Human Rights and equality are not concessions. They are fundamental entitlements. Whatever happens in the next phase of the talks process, there must be acts of completion on human rights and equality.

There can be no tolerance for continued prevarication by the governments on these crucial elements of the process of change which all of us, apart from the DUP, signed up to six years ago.

Getting the political process back on track requires much more than the demand that the IRA disarm and disband.