What is required for September talks success 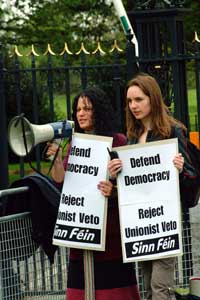 Last week, in a series of interviews, Sinn Féin President Gerry Adams said republicans need to be prepared to remove the issues of the IRA and of IRA arms as an excuse for unionists to block political progress in the Six Counties.

"I personally feel that while there are justifiable fears within unionism about the IRA and while people have concerns about the IRA, I think political unionism uses the IRA and the issue of IRA arms as a excuse," he said.

"However, we who are in leadership in Sinn Féin and who are trying to move the process forward can only do so if we create a context in which there is an ongoing process of sustainable change. At the moment, we don't have that. We have the exact opposite."

Here, LAURA FRIEL assesses the chances for success in September.

Republicans are not the problem - BY LAURA FRIEL

Never underestimate the power of definitions. Anyone who is familiar with the writings of Noam Chomsky will be aware of the role the media plays in the process of reinforcing and maintaining dominant political discourses.

The established British discourse around the continued occupation of the north of Ireland relies on a number of ideological fabrications. These have nothing to do with the facts or reality but everything to with perceptions of the problem and consequently the kind of solutions available. Controlling definitions is about controlling outcomes.

In the dominant discourse of British occupation, 'violence' as an attribute is most closely associated with oppositional forces, particularly republicans and to some extent, northern nationalists and Catholics.

The historic fact that the military imposition of partition and the creation of a one-party pro-British unionist state was achieved through violent means and against the democratic wishes of the Irish people as a whole, counts for nothing within this dominant discourse.

The fact that the unionist dominated Six Counties has been historically anti-democratic and traditionally violently opposed to even modest social justice and democratic rights for northern nationalists, is never mentioned.

Repression, curfews, internment, raids, military occupation, plastic bullets, kangaroo courts, collusion with death squads, unionist weaponry, sectarian violence, in fact the whole gambit of how British occupation has been experienced, well you can ignore all that.

Within the preferred British discourse, republicans are 'violent', unionists are 'democrats' and the British are the 'peacemakers'. It's as simple as that, or so they wish.

As we move closer towards the scheduled September talks, the British media has already begun to outline what the British and their unionist allies hoo governments generally describe the outstanding issues in the 'stalled' peace process as 'paramilitarism' and 'powersharing', said Adams.

"Of course they, or at least the British Government, don't mean paramilitarism. They mean the IRA. In most cases, that is the focus of the media as well. The various unionist armed groups and their sponsors in the British Crown forces are usually given a bye ball," said Adams.

Such a focus is not only at variance with the Good Friday Agreement, as Adams points out, it arbitrarily renders the rights of everyone on the island of Ireland who voted for the implementation of the Agreement conditional on what the IRA does. Rights, by their very nature, cannot be conditional.

In the run up to the talks, the British Government, as the most powerful player in the peace process, is attempting to obscure its failure to fulfil its obligations under the Good Friday Agreement by hiding behind the ideological construct of a IRA bogeyman.

Recently, Gerry Adams suggested that republicans might need to be prepared to remove the issues of the IRA and of IRA weapons as an excuse for unionists to block political progress. The immediate hostile unionist response to Adams' comment suggests that the British Government isn't the only one hiding behind the IRA.

The unionist response was both strident and belligerent, reinforcing a belief within the northern nationalist community that political unionism is using the issue of the IRA as an excuse to obstruct progress in the peace process. This position is reminiscent of the comments by the then leader of the Ulster Unionist Party, James Molyneaux, in the wake of the IRA cessation in 1994, when he asserted that this was the most destabilising event since partition. It could be argued that political unionism wants and needs the issue of the IRA as an excuse to block further progress. Gerry Adams dealt with this when he asked: "Are unionists so afraid of change that they would prefer to see armed groups and political instability continue?

"If the answer to this is no, and unionists want to see an end to armed groups and do want political stability, do they have any sense of their responsibility and role in bringing this about?"

Commenting on the September talks, Adams said Sinn Féin would be going into these discussions positively and constructively and with a determination to achieve a successful outcome.

"At Bodenstown in June and after the events in north Belfast on July 12, I expressed our desire to see a holistic definitive and conclusive closure to all of the outstanding issues. That is our position," said Adams.

"But for that goal to be achieved it will require the DUP to face up to the challenge of talking to and sharing power with republicans, as well as joining with us in resolving matters as diverse as policing, human rights, equality and sectarianism. Are they up to it? I don't know," said Adams.

In a recent interview, former IRA POW Seanna Walsh addressed some of the myths underpinning the British and unionist focus on IRA decommissioning. After his release in 1998, Seanna was one of a number of republicans to meet with unionist religious and civic leaders.

"I explained to them that I had gone to jail for possession of home made explosives and mortar bombs and that with a few hundred pounds I could go out and buy the materials to do the same again," said Walsh.

"I wanted them to understand that you can decommission whatever weapons you want and the next day go out and start again. What has to be achieved on all sides is the decommissioning of the causes of the conflict," Walsh told the Irish News.

But the causes of the conflict seem to be precisely what the unionists and their British supporters are afraid to address. Political progress towards equality, justice and democracy are currently being stalled by the British Government at the behest of rejectionist unionism.

"The problem with British policy on Ireland is that it is essentially about upholding the Union. While Tony Blair may think he is modernising unionism, his strategy and policy mean that inevitably it is the UUP and DUP which are allowed to set the pace," said Doherty.

"The best way to secure all our futures is for the British to make a strategic alliance with Irish nationalism and republicanism. Sinn Féin wants to make peace with unionism," he said.

"We face a new round of negotiations in September. We are promised they will be intensive. But as we go into a new mode, the British Government has a clear-cut choice. Either it stands with the Agreement and builds a bridge towards democracy and equality, or it sides with the forces of reaction," said Doherty.

For northern nationalists the questions arising out of pending negotiations are not those peddled by the mainstream media and political commentators. Will the British and Irish governments fulfil their commitments under the terms of the Good Friday Agreement? Will Tony Blair stand up to rejectionist unionism and the securocrats within his own government? Can the DUP cut a deal and stick to it? These are the questions that remain to be answered.

For northern nationalists, the questions arising out of pending negotiations are not those peddled by the mainstream media and political commentators. Will the two governments fulfil their commitments under the terms of the Good Friday Agreement? Will Tony Blair stand up to rejectionist unionism and the faceless securocrats within his own government? Will he bring the NIO under control? Can the DUP cut a deal and stick to it? These are the questions that remain to be answered.