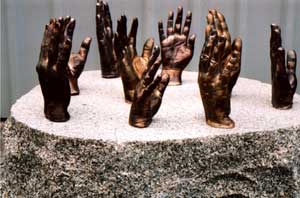 One of the oldest pieces of artwork in the world is a handprint in Kaakadoo Cave, left there by an Australian aborigine 60,000 years ago. On a recent trip to Australia, artist Raymond Watson heard about the hand and the story behind it.

It prompted, in part, one of two exhibitions, which he put on in this year's Féile an Phobail, called Hands In History.

His second exhibition was called, The Prism — Maze/Long Kesh.

The Hands in History exhibition consists of 18 pieces of work sculpted out of wood, stone and bronze.

"Hands and their use are very important in life. We do everything with them. A hand shows a lot of a person's characteristics. People have been reading palms for centuries," said Raymond.

In this exhibition, the 'hand' is presented as an instrument of communication and peace.

The centrepiece is a sculpture presenting the aspirations of the Good Friday Agreement.

Raymond managed to convince, quite remarkably, the leaders of the pro-Agreement parties, some of whom refused to shake hands with each other, to stick their hands into a bucket of plaster, out of which he moulded their individual hands in bronze.

He then placed the moulded hand of each leader on a round stone.

Raymond chose stone to anchor the hands because, "in ancient times there was a sense of immense power and permanency about a large round shaped rock. In mythology and contemporary times people, chieftains and monarchs touched or sat on a stone to pledge themselves to a better future."

Raymond's art is an "instinctive response to the situation here".

He has taken slides of his work abroad to show other artists living and working in countries where there has been or is conflict.

Raymond believes the themes he is working on here are applicable to conflicts anywhere in the world.

He described his prison-related exhibition as 'conceptual'.

He uses familiar items in an unconventional way to challenge the many social and cultural values we have.

He uses these items in three installations. For example, inside a square barred cage there are the feet of a small child sitting on top of a bible, which is placed on a floor made of frosted ice.

During the blanket protest for political status in the H-Blocks, men would stand on the bible in their bare feet to keep them off the cold floor.

But the point of this piece was to show that people "stand securely on long established beliefs and are afraid to step outside of what they know, in case they step on something that is perceived as being cold and uncomfortable".

The Visiting Room experience instils a sense of confinement as you sit looking through a slit similar to that on a cell door. Over your head is a small prying camera and when you look through the slit in the metal plate your eyes rest on a bird's nest, which is also inside a small barred cell. Bobby Sands' poem, The Lark and the Freedom Fighter, came to mind as I looked at the nest.

The metal plate is etched with a security map of Long Kesh and is rusted down to indicate signs of decay.

The message from this display is about life's constraints: family, social pressure, financial responsibilities and many others. They create "prisons we don't see".

The last of the installations is a large picture of a 'Control Tower'. It draws one's attention to the fact that those with the responsibility of confining the prisoners and maintaining Long Kesh — the guards — were the first to start destroying it and those held there — ex-prisoners — were the first to demand the prison be maintained as a museum. The irony of this is obvious.

There are a small number of photographs on display, taken by Raymond when he returned to the prison, and a short film.

Both show a prison in slow decay; nature reclaiming its territory. The prison comes across as a vulnerable place being stripped by the elements.

Those of us who spent time there could never have conceived of it as it is now in decline; it was all consuming and overpowering for us while we were there.

The film and photos also show a bleak and desolate landscape, occasionally brightened by beams of natural light.

But no amount of natural adornment can take away from the grotesque façade which is Long Kesh today and which in its heyday brought so much misery into the lives of prisoners and their families.

Both exhibitions are of a very high standard in terms of the originality of thought which went into creating them and of Raymond's skill as a sculptor.