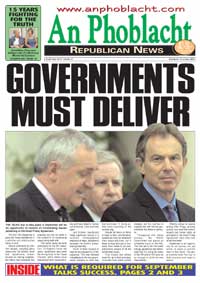 The talks due to take place in September will be an opportunity to resolve all outstanding issues pertaining to the Good Friday Agreement.

The Sinn Féin leadership is going into these negotiations in a positive and constructive frame of mind.

Recent comments by Sinn Féin leaders, including Gerry Adams and Pat Doherty, show that republicans remain focused on making progress. But others must recognise that progress can only be made in the context of all outstanding issues being dealt with.

This month marks the tenth anniversary of the IRA cessation. Throughout those ten years, republicans have been the driving force of the Peace Process, while others have abandoned their responsibilities and have failed to honour commitments, time and time again.

Last October, republicans made significant moves in a carefully choreographed sequence of steps, designed to reinstate the North's power-sharing Assembly.

David Trimble refused to respond and stepped out of the sequence. This was followed immediately by the two governments reneging on what they had promised. In doing so, they were marching to the unionist step.

Despite the failure of others to keep to their commitments, republicans have not abdicated their responsibilities, but if these coming talks are to succeed, there needs to be comprehensive closure of all the outstanding issues.

That means that others must live up to their promises. Unionists must make certain pledges, but the real key to progress lies with the two governments, the British in particular.

Throughout this whole process, the British Government has placed an unhealthy focus on the IRA. This has led to the firm belief among republicans and nationalists that it is using the issues of the IRA and of IRA arms as an excuse to shirk its own responsibility.

Britain's refusal to resolve, among other things, policing, justice and demilitarisation, equality and human rights, all promised in the Good Friday Agreement, have only reaffirmed this belief.

September is an opportunity for all parties, not just some, to make a commitment to the future. The governments hold the key to that success and need to deliver.