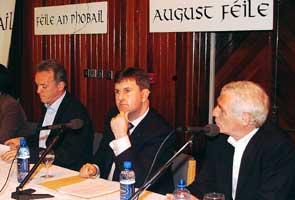 By the time former political prisoner and senior republican Seanna Walsh rose to speak at the 'West Belfast Talks Back' Féile event last week, he was speaking in an already charged atmosphere.

This was due to the fact that Féile Chairperson, Carol Jackson, had just informed almost 800 people, one of the largest audiences for the annual event, that several armed members of the PSNI were in the hall.

The PSNI imposed themselves on the audience on the pretence that they were there to protect DUP MP Jeffrey Donaldson, who was part of the 'Talk's Back' panel.

From 2pm that day, Wednesday week ago, the event's organisers were locked in a tussle with the PSNI over the force's intentions.

The strong protests from the organisers that they had provided adequate security for unionists in previous years and that DUP MP, Gregory Campbell was there safely last year fell on deaf ears.

The PSNI made it a condition of Donaldson's participation that they be in the room with him.

The organisers were faced with a dilemma: lose Donaldson or allow the PSNI inside the hall.

It wasn't a new dilemma. The RUC tried to prevent Sinn Féin councillors representing their constituents by attending council meetings at which Sinn Féin was participating. They were hoping that Sinn Féin's opposition to the RUC would lead to them boycotting the meetings.

However, these spoiling tactics never succeeded in the past and they failed again that Wednesday night, when the organisers graciously permitted Donaldson and his armed wing to stay for the debate.

Seanna's intervention on the issue of the IRA's capacity, prompted by a question from the audience, brought a degree of reality rarely seen in public when this matter is being discussed.

As he stated himself, it wasn't a technical question about arms and bombs and what was done with them, because guns can be bought and bombs made.

Addressing Donaldson he said: "Jeffrey, when you talk about the IRA's capacity to make war, I can go out of here tonight with a couple of hundred pounds in my pocket and purchase the equipment to make Baltic Exchange/Canary Wharf type bombs. How are you going to remove that capacity? How are you going to defuse me? Are you going to shoot me?"

Donaldson was clearly taken aback by the dramatic and forthright manner in which he was addressed and decided to hide behind the standard unionist demand.

However, the DUP man's own answer to the question as to whether he believed the IRA would go back to war was less than convincing.

Indeed, as the chairperson of the panel, Noel Thompson of BBC's Hearts and Minds fame, said to him, his answer suggested he thought it unlikely the IRA would return to armed struggle.

St Louise's assembly hall was packed to the doors, while another 200 people were turned away. Those lucky to get in gave Donaldson a very warm reception.

The people of West Belfast are highly political. Their welcome for Donaldson was on a par to that given to his colleague of recent vintage, Gregory Campbell MP, at the same event last year.

The message on their hands was on the lips of Annie Cahill, Joe's wife, who gave what must be her first television interview as she left the debate: "He was very welcome here tonight. I hope he welcomes us."

Thompson, in his skilful and polished way, got the debate off to a humourous start when he jibed the panellists as he introduced them.

So Mary Lou McDonald MEP was 'Chucky Spice', George Galloway MP was 'Gorgeous George from Baghdad Central. 'What a difference a year makes' preceded Donaldson's introduction (and brought great laughter), a reference to him recently leaving the UUP for the DUP. Thompson appealed for a 'drug' to give Eamon Dunphy a more positive outlook.

Dunphy who for years prior to the IRA's cessation railed against republicans, said he had changed his outlook when he read a book about the hunger strikers.

He said this generation of republicans would have a "magnificent place in the history books". Answering the question about the IRA's future, he said it would not be solved in "papers or TV studios".

Galloway, displaying a fair grasp of Irish history, said we wouldn't be dealing with that question today if "people were committed to exclusively peaceful means", because we would be living in an "80-year-old united Ireland," a reference to the unionist's armed rebellion against Home Rule in 1912.

Mary Lou said the IRA had given the Peace Process a "fair wind", despite years of broken promises by the British Government and provocation by unionists and loyalists.

And answering Donaldson's assertion that unionists don't trust the IRA, she said to thunderous applause, "I've news for you Jeffrey, we don't trust you".

A question about the deposing of Saddam Hussein shed some very interesting light on Galloway's relationship with his regime. Galloway has been demonised in the British press and was dismissed from the British Labour Party for this relationship.

The media onslaught of Galloway left me with the impression that he was an apologist for Saddam, but this was not the case, as was obvious from his response to the question.

I was very surprised to learn that he had met Saddam only twice and as he said himself, "the same number of times as Donald Rumsfeld, (a member of Bush's war cabinet), with the difference that Rumsfeld gave him guns and gas, which he used on the Kurdish people".

The question opened up a debate about how to deal with dictators and undemocratic regimes around the world.

With the exception of Donaldson, the panel agreed that unless the US and Britain invested their authority in the United Nations, then it was very much back to the imperialist days of 'gun boat diplomacy' with the US, according to Dunphy, roaming the world like a 'raging bull'.

A speaker from the audience living in exile from Iraq said that 'people power' should be relied upon and that the people should be given assistance to overthrow dictators.

This brought out the best in Donaldson, when he asked passionately: "Is my family not entitled to know who killed my cousin, Samuel Donaldson, one of the first members of the RUC shot dead by the IRA?" (at the start of the conflict).

The question also brought a man to his feet who spoke in a faltering voice about his 18-year-old brother, Paul Armstrong, who was shot dead in 1972 (check date) with "four bullets in the head". "Who killed him?" asked the man in a forlorn voice; the first time he has ever spoken about his brother's killing in public.

A question about the Irish Government's smoking ban brought some interesting reactions from the panellists.

There was a call for 'smokers' bars', 'ventilated bars', 'smokers' rooms' in bars, a total ban on smoking, and a ban on alcohol which, according to all the panellists, was more damaging to people and costs the health service more money than smoking.

It was another successful night for An Féile and a demonstration of its commitment to an inclusive society.

This generosity towards Jeffrey Donaldson and unionists was reflected in a vox pop from the audience by the BBC as they left the meeting.

It is just a pity that Donaldson had to follow Campbell's actions last year when he refused to acknowledge Gerry Adams, MP for the area, who was in the audience, or the fact that one in two people from West Belfast vote Sinn Féin.

But that's another story altogether.