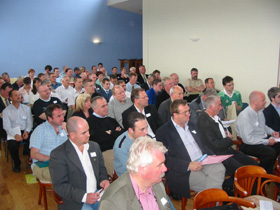 "We cannot sustain our struggle by being just a constituency service. We must include an extra dimension of practical steps towards a united Ireland," Pat Treanor, Sinn Féin National Organiser, told the party's National Elected Representatives Forum last Saturday.

Nearly 100 elected representatives from all corners of Ireland, including councillors from the 26 Counties, heartened by their recent election victories and full of enthusiasm, ideas and determination, came together in the Simonscourt GAA Club outside Navan to discuss how to do this.

Caoimhghín Ó Caoláin, Sinn Féin leader in Leinster House, opened the conference with a review of the current political situation.

"We don't hold elected office for something to do," he said. "The seats won by Sinn Féin do not belong to us as individuals, or to the party. We hold them in trust for the people. Our responsibility is to represent the communities that elected us individually and collectively. We have an over-riding national responsibility to work for Irish re-unification and for social and economic justice."

Martina Anderson, the party's all-Ireland co-ordinator, gave a presentation on political objectives in Local Authorities, which stressed the need for activists and elected councillors to consider why they are there and to ensure that they work to advance the republican struggle.

"We need to build the political strength across the whole country that we need to take this struggle forward," she said. "We need to reach out to communities and engage with them in the work to build support for achieving a united Ireland of equals. This is our task."

A lively discussion followed, before Matt Carty, vice-chair of the Forum, presented a paper of party guidelines for councillors, followed by two plenary sessions and a a panel discussion which discussed issues of concern for councillors, north and south.

Pat Treanor, closing the conference, said it had been an important day, one that represents a new beginning, marking the onset of a new and strategic approach towards work to ensure that republican politics are centre stage in the work of elected representatives.