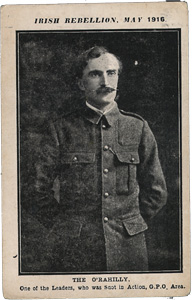 One of the least known but most important gunrunning operations in Irish history took place in Kilcoole, County Wicklow, on 1 August 1914. It arose from an initiative taken in early 1914 by Michael O'Rahilly (The O'Rahilly), Director of Arms of the recently formed Irish Volunteers, in conjunction with Erskine Childers, Sir Roger Casement, and other prominent nationalists.

Funding from the American-based Clan na Gael and several wealthy donors enabled Darrel Figgis to purchase 1,500 Prussian rifles and 45,000 rounds of ammunition from the Hamburg firm of Moritz Magnus in June 1914.

The mission was given added urgency by the arming of the Ulster Volunteer Force in April with the tacit support of high-ranking British Army officers and the Conservative Party. Many Volunteers and Revolutionaries of the Irish Republican Brotherhood were determined to hasten the armament of their followers to protect northern nationalist communities and to encourage the weak London Government to honour its commitment to granting Home Rule for Ireland.

With the guns and ammunition expected in Hamburg from a Liege warehouse on 4 July, advanced planning for getting the contraband to Ireland took place. Two yachts, the Asgard, captained by Childers, and the Kelpie, owned by Limerick Volunteer Conor O'Brien, sailed separately to meet a German vessel hired by Figgis off the Belgian coast on 10 July. Kelpie left the Shannon River port of Foynes on 29 June and made slow progress towards Cowes in the Isle of Wight, where it eventually met up with the Asgard. As Childers was delayed by unfavourable weather and did not arrive from North Wales until 9 July, the rendezvous was postponed until the 12th. Contact was then made off the Scheldt near the Ruytigen lightship and the weaponry was quickly loaded.

Asgard, famously, landed its guns in broad daylight at Howth on 26 July, where Bulmer Hobson had arranged a large party of Volunteers and Na Fianna Éireann to spirit away the cargo. The Kelpie's munitions, however, had been expected in Kilcoole at midnight on the 25th after transshipment to the Chotah off Bardsey Island in the Irish Sea. Sir Thomas Myles' Chotah had an engine and as such could be relied upon to time its night arrival in Kilcoole but, once again, adverse weather and storm damage prevented its meeting with the Kelpie. Instead, both ships took shelter in St Tudwell's Roads, off Abersoch, Wales, and plans were laid to complete the mission the following week.

In Dublin, Seán Mac Diarmada helped Hobson select Volunteers to unload the Chotah and move its contents to safety. On 1 August the men went in small groups to Kilmacanoge posing as tourists and after dark, made their way to Kilcoole beach, where Sean Fitzgibbon supervised the unloading. Liam Mellows, tasked with getting the 600 rifles to secure dumps, was driven to Kilcoole, by Eamon de Valera, a rising figure in the Volunteers. Disaster almost struck in Bray near dawn, when the overloaded charabanc used as the main transport broke down. The day was saved when a fleet of taxis was summoned from the city to bring the arms and Volunteers to safety.

An added concern for the IRB clique on the Volunteer Executive was keeping the precious guns away from moderates influenced by John Redmond's constitutional nationalists. Mellows consequently delivered the rifles to Joseph Plunkett, who apparently hid them on his Kimmage property yet disclaimed all knowledge when pressed by the Redmondites.

The availability of the Kilcoole guns in the Dublin area gave the Volunteers a tremendous morale boost and obliged the British Government to take the movement seriously. A secondary effect of the Howth and Kilcoole landings was the temporary lifting of the arms importation ban, a useful respite which enabled The O'Rahilly to obtain a large stock of modern British rifles. An arguably more important outcome of the gunrunning, however, was its role in shaping and consolidating the republican leadership cadre which triggered the 1916 Rising and later commenced the Tan War.

• The 90th anniversary of the Kilcoole Gunrunning will be marked by Sinn Féin at a commemoration this Sunday 25 July. Assemble 2pm at the Church in Kilcoole and march to the monument at Kilcoole beach. The main speaker will be Louth TD Arthur Morgan.