After Ardoyne: Securocrats must be reined in 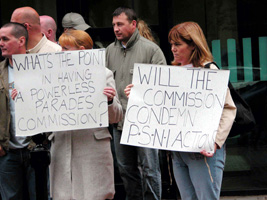 On Monday 12 July, in defiance of the Parades Commission's determination, the PSNI forced a crowd of Orange Order supporters, including some known unionist paramilitaries, through nationalist areas of Ardoyne, Mountainview and the Dales in North Belfast.

To facilitate this banned parade, hundreds of heavily-armed British soldiers were deployed. Local residents were corralled behind a wall of steel and faced with lines of baton and riot shield wielding members of the notorious British Parachute Regiment and the PSNI.

In sharp contrast, PSNI officers chatted with Orange spectators, some of whom engaged in highly provocative displays of anti-Catholic bigotry and whose threats of disruption and intimidation preceded the parade. The low-key PSNI operation here involved waist-high fencing and a handful of PSNI officers.

Gerry Kelly, Kathy Stanton, also a Sinn Féin MLA for North Belfast, and other Sinn Féin councillors were present throughout the events in Ardoyne.

This week, Gerry Kelly spoke to An Phoblacht's LAURA FRIEL about the events of last week.

Gerry Kelly: To begin to appreciate the anger and hurt of the nationalist community in Ardoyne you have to understand that this is the area of Holy Cross. This is the area where Catholic schoolchildren, some as young as four years of age, and their parents, were forced to run the gauntlet of unionist bigotry and violence for months as they walked to Holy Cross school. The area has also endured ongoing sectarian attacks against Catholic homes.

So this isn't just any nationalist area objecting to an Orange march; this is an area that has endured not only provocation, but sustained violent attack, some of which has been perpetrated by Orangemen and their unionist paramilitary supporters. In a nutshell, we have a population already traumatised by anti-Catholic violence and bigotry forced to witness some of the very same people engage in a coat trailing exercise through the heart of their community, against the Parades Commission's ruling and facilitated by British crown forces.

An Phoblacht: Who do you think was responsible for the decision to force this banned parade through the Ardoyne district?

The buck stops with the British Government. Clearly, the British Secretary of State, Paul Murphy, is still listening to the securocrats who have been manipulating the system here for the last 30 years and indeed, many years before that. The securocrats are still operating to a pro-unionist, anti-nationalist agenda and are attempting to hold onto the old ways of the discredited Orange state.

The NIO securocrats are a malign influence over this entire process. The process will not succeed if they are not reined in, because what we are talking about here is the same ethos, the same objectives and in many cases the same people who forced the Orange Order march down Garvaghy Road in 1997 (Indeed, the names of some of those currently involved are to be found on an NIO internal memo which found its way into the public domain at that time).

This decision was made at a political level. It is Sinn Féin's belief that the decision to force this parade through Ardoyne had already been made when unionist politicians emerged from meetings with British officials at Hillsborough some days earlier. Rather than uphold the rights of nationalist residents, the decision makers caved in to, or were complicit in, threats of intimidation and disruption by unionist politicians and paramilitaries.

This policy of appeasing those who will not engage in dialogue with nationalist residents, whose supporters indulge in blatant displays of anti-Catholic bigotry and anti-Irish racism during Orange marches, and who threaten widespread disruption and intimidation if they are not allowed to flaunt their outrageous behaviour in the faces of those they despise, goes to the heart of the political project facing us all.

That is building a society based on equality, understanding and respect; an Ireland of Equals.

The British Government's failure to implement the Good Friday Agreement and instead their policy of giving in to unionist intransigence in whatever form, the DUP, the Orange Order and unionist paramilitaries, is undermining the peace process.

How do you view the PSNI's role in the events in Ardoyne?

On 12 July the PSNI implemented the British Government's political decision. In addition to the political provocation of effectively overturning the Parades Commission's ruling, the PSNI's decision to deploy one of the most hated sections of the British Army, the paratroopers, into nationalist Ardoyne further fuelled an already volatile situation.

And let me tell you this, all the ingredients for another Bloody Sunday were in place in Ardoyne that day. That this was avoided, and it was avoided by a hair's breadth, was entirely down to a few dozen republican activists.

"The PSNI's decision to deploy British paratroopers was a recipe for disaster. The NIO had created the situation. But once given the opportunity, the PSNI reverted to the old discredited RUC style of anti-nationalist policing.

What then the future for policing?

Without the full implementation of the Patten recommendations and the introduction of real mechanisms of democratic control, the PSNI will remain unaccountable to the communities they are policing. That unaccountability is at the heart of policing. The continuing anti-nationalist ethos of Special Branch inevitably has the PSNI operating like the RUC.

Democratic accountability would make the kind of policing and military tactics deployed against the people of Ardoyne last week impossible. In that context, political solutions would have to be sought through dialogue and engagement. In circumstances where physical repression has traditionally been deployed to support and bolster unionism, the removal of repression as an option can transform the political landscape. Sinn Féin has been particularly clear sighted on the importance of getting policing right.

What about the wider political fallout on the policing issue?

In recent weeks a number of senior members of the SDLP have begun to publicly question their party's current position on policing in the North. Dolores Kelly, Danny O'Connor and Martin Morgan have all suggested that the SDLP might consider withdrawing from the policing boards. Such a move would be welcomed within the nationalist community.

But the important thing is that these realities — unacceptable policing — are grasped now and dealt with or the momentum will be lost and perhaps even reversed.

Some media commentators have tried to portray republican intervention in Ardoyne as somehow defending the British Army. How do you reply to your critics?

Some journalists enjoyed this opportunity to trivialise what was a very dangerous and volatile situation which, without the timely intervention of republicans, could have escalated into a bloodbath.

The situation was this. A crowd of unarmed civilians, many of them teenagers were facing a heavily-armed and increasingly agitated British Army unit. When a handful of soldiers became isolated within the crowd, one soldier cocked his weapon in readiness to open fire. We all know what can happen when British soldiers start firing into a civilian crowd. We can all remember Bloody Sunday.

The presence of mind and timely action of republicans in defusing the situation narrowly prevented that. This has nothing to do with how we view the British Army or for that matter the PSNI and most thinking people know that.

What consequences do you think events in Ardoyne have had on the Parades Commission?

Unionists have been trying to undermine the Parades Commission for some time. The political decision by the British Government to undermine the authority of the commission will only encourage further unionist and Orange Order intransigence.

That decision was a slap in the face to the nationalist community. It was a decision that could only have been made at a political level. That decision could have disastrous consequences for the Parades Commission.

The commission was set up precisely to ensure an independent decision making mechanism operating in accordance with its stated remit, rather than decisions made at the whim of political manipulation and unionist paramilitary intimidation. Sinn Féin will, of course, be pursuing this matter with the British and Irish Governments.

Before ending this interview, I would like to extend my sympathies, and the sympathy of all republicans to the family of Tommy Clarke".

Tommy died of a heart attack in Ardoyne on 12 July during the events described.