The two oranges that shook Apartheid 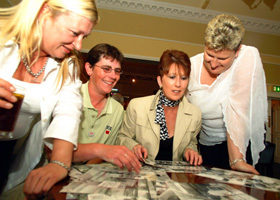 Catherine O'Reilly, Karen Gearon, Alma Bonnie and Mary Manning pore through some of An Phoblacht's file photos from the famous dispute

Twenty years ago this month, ten workers from the Henry Street branch of Dunnes Stores in Dublin's city centre went on strike to protest the selling of produce from Apartheid South Africa. A year later, the group was joined by another worker, Brendan Barron, from the Crumlin store, bringing their number to eleven. The workers had no idea when the strike started that it would last for almost three years, or that it would ultimately result in the government banning South African goods from Irish stores.

Last Monday, the strikers, family members and supporters, met in Dublin for an anniversary re-union. On the night, An Phoblacht's JOANNE CORCORAN talked to Karen Gearon, the then shop steward, about her memories of the strike.

When Karen Gearon walked out of Henry Street Dunnes Stores 20 years ago, she had no idea how significant the strike she was about to embark on would become.

"Basically, it started when our union passed a resolution at their Easter conference saying that members should not handle South African goods because of Apartheid," Karen recalls.

"That was at Easter and we got the instruction down in July, about two days before the actual strike started. I was the shop steward at the time, so I passed it round to everybody.

"We were so naïve we actually didn't know what goods in the shop were South African," she laughs. "We had to go around picking things off shelves and checking. We found out it was mainly fruit and vegetables that carried the South African logo."

According to Karen, management reacted immediately to the buzz of protest on the shop floor.

On Thursday 19 July 1984, the staff's resolve was put to the test. A customer approached Mary Manning, who was on the checkout at the time, with two South African Outspan oranges. Mary gritted her teeth and politely told the customer she couldn't handle the goods because they were South African.

"Mary was brought upstairs with myself and was given five minutes to reconsider her position," Karen says. "We weren't allowed talk to each other during the five minutes. She was kept in one room and I was kept in the other. And then we came back in and Mary said, 'No, I'm sticking by my position', and the Dunnes Stores strike began."

Karen called the union and told staff what had happened.

"More people walked out that day than actually stayed on strike," she says. "A couple of them went back two days later.

"We decided we wanted to learn more about the issue, and so we started to look into South Africa and what was happening there," Karen remembers. "The more we learned, the more passionate we felt.

"There were so many people who made such a big impression on us. Nimrod Sejake, who was a black South African exile, joined us practically every single day, and he was amazing.

Karen says one moment stands out in her mind, that to her, made it all worth it.

"A man called Marius Scoone, who was a white South African, came to give us his support," she says. "His wife and daughter had been killed by the security forces in South Africa and he got up on the podium and praised us for what we were doing. That had a real effect on me."

Tutu and a trip to South Africa

The strike began to gain serious momentum when Archbishop Desmond Tutu invited some of the group to meet him in London while he was en route to collect the Nobel Peace Prize. Karen, Mary Manning, IDATU union official Brendan Archbold and the meeting's organiser, Don Mullen, travelled over.

"That was definitely the turning point," says Karen. "We got massive publicity and he invited us over to South Africa."

A plan was made to travel to South Africa on the first anniversary of the start of the strike.

"We had no money to carry out our plan, so we had to do a collection," Karen says.

"One Friday night we went out around Dublin and raised £6,000. That showed us just how much support was out there, because the '80s wouldn't have been an affluent time in Ireland. Anyhow, we booked the trip and were ready to go."

But when the group checked in at Heathrow Airport that July, they were summoned to the information desk and told they couldn't get on the flight. "The South African authorities had told Heathrow that they would not allow the plane to land in South Africa if we were on it," says Karen. "We didn't know what the hell was going on. We were asked to submit our boarding passes and we refused to do it. They even took our luggage off the plane. But we held on to our boarding passes.

"Then somebody from the South African Embassy came to talk to us, but we refused to meet them, because we didn't recognise their authority. They wanted us to fill in visa application forms and we refused to do that too, because Irish citizens didn't require a visa to get into South Africa."

The flight, which should have taken off at 7pm, was by this stage running three hours late.

"We genuinely didn't think it was going to happen," Karen says. "By this point we'd all rung home and told everybody we weren't going."

But five minutes after 10pm, the group was rushed onto the plane.

Karen remembers the trip being a nightmare, because the captain told the impatient passengers that the people boarding were the ones who'd held the plane up for three hours. "You can imagine the atmosphere," she recalls.

When the plane landed in Jan Smuts Airport in Johannesburg, it was greeted by police and army officials.

"We thought it was normal. We didn't know what to expect. But then we found out that they were there for us. We got our passports checked and then we were literally surrounded by the army. We were asked if we were the group from Ireland and we said yes, and then we were escorted upstairs. We stayed there for eight hours and were sent home on the same plane."

The group was terrified, but, as Karen points out, the incident turned in their favour.

"Well, had they let us in, we wouldn't have got a quarter of the publicity we eventually got," she laughs.

"When we arrived back in Heathrow, everybody was told to stay in their seats and the police boarded the plane. We thought, 'Oh shit, we're going to get thrown out of here as well'. But they were there to bring us to a press conference. BBC, RTÉ, the works, were all there."

Shortly afterwards, Karen and Michelle Gavin were invited over to New York to address the UN Special Committee against Apartheid.

"I met the Reverend Jesse Jackson, and famous musicians, activists like singer Pat Benatar and guitarist Steve Van Zandt. That was gobsmacking stuff. You have to remember I was only 21 years old."

The strike had moments like these, but Karen remembers the hardship endured all to well.

"We were on the picket line every day of every week. One winter it was so bad that we actually had plastic inside our shoes. One of the women (Vonnie Monroe) lost her house because she couldn't make the repayments on it. We had £21 union pay a week and most of us had been on £100 before that. Luckily, most of us lived at home, which made it easier. We did a lot of collections, many of them with the miners in Britain, who were also on strike at the time. There was a lot of solidarity between us."

No matter how tough it was, Karen says at no stage did anybody consider giving up.

During this difficult period, the picketers got a boost from the many people who supported them.

"A lot of our supporters would go into the store and fill their trolleys and when everything was rung up at the cash desk, they'd walk out," Karen says. "They'd keep the South African fruit until last and then say, 'I support the boycott', and leave the trolley there."

They also engaged in overnight occupations of the store, a move the group used twice. "We wanted to make a stand and say, no you're not going to leave us outside the door."

Karen remembers some people coming up to the picket line and saying 'Well done'. But the people walking into the store would be embarrassed and often very hostile.

"We did get the odd comment, people coming to us and saying 'Fair play to yis girls, I wouldn't handle them either, not after a black man handled them'. There were a lot of ignorant remarks like that."

Karen says that because the dispute was centred around the Henry Street store, people tend to forget that other companies, like Clerys and Roches Stores, were actually implementing the boycott.

"All of their staff refused to handle goods that were South African, but their companies did nothing about it," she says. "That's what made it different. It was Dunnes Stores that initiated our strike; we didn't start it."

Towards the end of 1986, the union, IDATU, decided to lift the picket as a goodwill gesture to the government, who were investigating the possibility of banning South African goods.

"We had a huge fall out with the union and we were trapped in a situation where they had the money," says Karen. "All of that was happening and we were very disillusioned that Christmas. Eventually, the picket line was lifted and it stayed lifted." However, the strike didn't officially end until April 1987.

Some of the strikers went back to their jobs.

"It was horrific, absolutely horrific," Karen says. "The bad feeling was so just so intense in there. Our colleagues had stayed on the job when we left. Some were good friends. They took a very bad view of us. Early in the strike, their canteen was just over our picket line and they would throw tea and tomatoes on top of us. It was very bitter.

"On a personal note, I should never have gone back. About 13 months later, I was offered a management position and so was Mary. But Mary was emigrating, so that was fine. She wasn't a threat. I wasn't going anywhere, so they started trying to build a case against me. And they eventually sacked me."

Karen won her unfair dismissal case, but says "it wasn't worth the paper it was written on.

"I was blacklisted, I couldn't get a job anywhere because I was considered a troublemaker."

She was forced to move to Kerry, where she still lives, to look for work. But she believes it was all worth it.

"We won," she says. "All we wanted was for us not to have to handle the goods; the bonus was the government coming out and banning them. We didn't start the movement, the movement was there before us, but we certainly brought a new life to it, and we raised its profile.

"Before that strike there were about six divisions of the Anti-Apartheid Movement in Ireland," Karen says, and you can sense how proud she is. "By the time we finished there was an anti-apartheid division in every single county and some had three or four. That was an amazing achievement."