Blair still not believed, despite what the Butler found 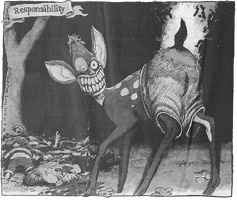 It was a small irony, and perhaps that is why it was overlooked during the debate on the Butler Report in the House of Commons on Tuesday, but it was nevertheless a telling one. During Tony Blair's statement, an MP intervened to question the way in which intelligence was presented to Parliament in order to persuade it of the case for war. In response, quite incredibly, Blair did the very same thing he was being accused of; he again justified the invasion of Iraq on the basis of intelligence received whilst neglecting — and one has to assume that it was, on this occasion at least, a deliberate act — to mention the qualifications and caveats included in the intelligence assessments of Saddam's weapons capability.

With some irritation at his judgement being called into question, the Prime Minister read out to the Commons a section of the Joint Intelligence Committee (JIC) report of March 2002, the report on which his claim that Saddam presented a threat was made, and on which the notorious 'dodgy' dossier of September 2002 was based. "Iraq is pursuing a nuclear weapons programme," he quoted from the text, with something approaching triumphalism. What he did not say, however, was that the very next sentence reads: "But it will not be able to indigenously produce a nuclear weapon while sanctions remain in place, unless suitable fissile material is purchased from abroad."

In other words, Saddam, even if he wanted to, did not have a hope of producing anything representing a nuclear weapon then, or at any time in the future. In other words, "pursuing a programme" to get something is a very different thing indeed to actually being in possession of it.

Blair carried on in this manner, insisting that the intelligence demonstrated without doubt that Saddam posed a threat. But, as was pointed out again and again, even the most hasty read of the JIC report shows that virtually all the claims about Iraqi weapons of mass destruction, including chemical and biological weapons, were qualified; indeed the report itself acknowledges that the intelligence was "sporadic", "patchy" and "scarce" Further, as Lord Butler himself pointed out, the report is full of ambiguous phrases such as "the intelligence indicates"; "we judge" (rather than, for example, "we know"). These ambiguities did not find their way into the September dossier, nor into Blair's statement to the House of Commons last March, when he falsely claimed that Saddam could launch a long-range WMD attack within 45 minutes.

As a further insult to the intelligence of his listeners, both in Parliament and outside, he then went on to list the "achievements" of the US and British military occupation of Iraq, offering a quite unrecognisable, utopian vision which was at manifest odds with the, already sanitised, version of the reality on the ground in Iraq, which the world sees on its television screens and reads in its newspapers every day.

According to Blair, Iraq is now enjoying all the schools and hospitals it needs, a free press, democracy and freedom from brutality. The reality is that schools and hospitals have few staff, little equipment and frequently no electricity. The media is controlled by the US administration, which simply shuts down newspapers it deems subversive, democracy consists of an imposed, puppet ruling council. And as for freedom from brutality — has he already forgotten about the atrocities committed by US and British soldiers? Has he forgotten about the 11,000-plus Iraqi civilians killed since the beginning of the occupation? Does he just turn off the television each time news of another car bomb exploding comes on? And what about the ongoing misery of Afghanistan and Palestine?

Never mind. Like Hutton before him, Lord Butler, in the teeth of all the evidence he had before him, chose to protect the Prime Minister and the security services. He had to turn a good few intellectual somersaults in order to do so and, also like Hutton, he has discredited himself in the process without actually achieving his aim of exonerating Blair in public opinion. Butler notes the multiple "serious flaws" in the intelligence and the way in which it was misrepresented or exaggerated, but concludes that no individual should bear any blame, least of all Mr Blair or the head of the JIC, John Scarlett. Scarlett, in the great tradition of British establishment wrongdoers and incompetents, has been promoted and will shortly take up his new post as head of MI6.

Tony Blair says he will take "responsibility" for any mistakes made, but then pointedly refuses to apologise, resign, or to actually say what those mistakes were. He claims to have acted in "good faith", as if that were enough to make up for what was, at best, appallingly bad judgement. In the same breath, however, he continues to insist that he was not mistaken and that Saddam did present a threat. Or he believes he presented a threat. It was difficult to tell during the debate on Tuesday which argument he was advancing. Perhaps this is because one characteristic of Blair is that he seems to have trouble with differentiating between what he thinks and what is. He appears increasingly to think that the former necessarily leads to the latter — that his believing something makes it objectively true.

But the fact is that millions of ordinary people around the world knew what Tony Blair did not, or says he did not know; that Saddam, however evil, did not represent a threat to the world and that Britain and the US went to war on the basis of a lie. The Butler Report, despite its best efforts, has not changed that view; if anything it has reinforced public cynicism, as an ICM poll on his trustworthiness in The Guardian this week demonstrated. Elsewhere, the Liberal Democrats overturned a huge Labour majority to win the Leicester South by-election on the day after the report was published, and a website was launched to lampoon Butler, going by the title of "The official Butler Report website — Now trading as the John Scarlett Appreciation Society (sound fellow... bit of a cockup... shame to sack the old boy... what what?)". The site's 'Evidence that Saddam had WMD' link takes visitors to the Flat Earth Society web page.

But one of most damning verdicts on the whole affair came from an unlikely source. Charles Kennedy, leader of the Liberal Democrats, told Tony Blair that he felt ashamed of Britain's participation in the invasion of Iraq, adding: "As he reflects on the well-documented litany of failings and the political misjudgements that went with them, I do hope the prime minister might acknowledge a sense of personal shame too."