What's sport got to do with it? 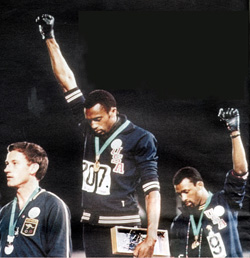 The Olympics may be the world's biggest and longest-running sporting event, but our strongest memories of the Games often have little to do with the sports involved. In the second part of her two-part Olympics special, An Phoblacht's JOANNE CORCORAN looks at some of the political gestures and various scandals that have made the Games much more than a sporting experience.

With the shadow of the Vietnam War, as well as the recent assassinations of John F Kennedy and Martin Luther King hanging over them, the 1968 Olympic Games in Mexico City were always going to be eventful.

Ten days before the Games started, social tensions in Mexico spilled onto the streets. Despite its dire economic state, the country had splashed out for the Olympics. On 2 October, a protest march of 10,000 students turned into a bloodbath when the Mexican authorities sent troops in to stop it. 200 students were killed and 1,200 injured.

The actual Games were also marked by controversy.

A movement to establish equal rights for black athletes had been growing and many countries had decided to boycott the Games. When the International Olympic Committee (IOC) invited Apartheid South Africa to the Mexico Olympics, the boycott was expanded to include most of the African nations, all of the communist nations, and many non-aligned countries. The IOC eventually succumbed to the ever-growing international pressure and rescinded its invitation to South Africa.

American athletes vowed to continue the boycott in the hope that it would force the US Olympic establishment to provide African-American athletes with the same opportunities afforded their white compatriots. However, the boycott eventually fell apart — people were thinking of their careers and death threats were made against individual athletes.

As an alternative path to a full boycott, African-American athletes decided to make symbolic gestures when they won. What followed still reverberates in sporting circles.

In the 200 metres, Tommie Smith took the gold and John Carlos the bronze. As the anthem sounded and the US flag was raised, the two men bowed their heads and raised their gloved fists in a black power salute. The silver medalist was a runner from Australia named Peter Norman, who wore the patch of the Olympic Committee for Human Rights in solidarity with Smith and Carlos.

Smith later told the media that he raised his right, black-gloved fist in the air to represent black power in America, while Carlos's left, black-covered fist represented unity in black America. The black scarf around Smith's neck stood for black pride and their black socks (and no shoes) represented black poverty in racist America.

While the protest seems relatively tame by today's standards, the actions of Smith and Carlos were met with such outrage that within hours, the two men were expelled from the Olympic Village and stripped of their medals.

As the Games continued, other athletes from a number of nations protested the treatment of the two in public statements and through other symbolic actions. The impact of the Olympic protest and the movement of black student athletes changed the world for black athletes.

Few who witnessed the 1968 Games could have imagined that an event would take place four years later that would eclipse them.

At 5am, the men knocked on the door of the Israeli wrestling coach Moshe Weinberg. Weinberg attempted to block the door and was shot dead, as was Josef Romano, who tried to escape.

The group then rounded up nine Israelis as hostages.

At 9am the men announced that they were Palestinian and that they wanted 200 political prisoners released, in addition to safe passage out of Germany.

After countless hours of intense negotiations, the group agreed to a plan where they would be taken by helicopter to the NATO air base at Firstenfeldbruck and be given an airplane to fly them and the hostages to Cairo.

In the course of the transfer to the airport, the Germans, who had planned to kill the guerrillas, discovered that there were eight Palestinians instead of the five they had expected and realised that they had not assigned enough sharpshooters to carry out their plan.

After the helicopters landed at the air base at 10.30pm, the German marksmen attempted to kill all the Palestinians. During the ensuing fight, one helicopter was blown up and all nine hostages were killed. Five of the Black September group also died.

Israel reacted badly when the decision was made to continue with the Games and subsequently targeted eleven individuals they claimed were responsible for the incident. Eight were assassinated by Mossad (Israeli secret service) agents. The Israelis came in for particular criticism after what became known as the Lillehammer Affair, when Mossad mistook a waiter for one of those involved and assassinated him in front of his pregnant wife.

Show me the money

Politics are said to dominate the Olympics, but money is never far behind. The 1960 Games in Rome were the first to involve big money, when $30 million was spent to showcase the city. In recent years, the international media has exposed endless stories of corruption affecting the Games, with the International Olympic Committee frequently in the headlines.

The IOC was first established in 1894 at an international athletics conference convened in Paris by Baron Pierre de Coubertin. Members were not paid but volunteered their services to the IOC, which was structured and functioned like a private and exclusive gentlemen's club. Operating today under the law of Switzerland, where it is based, the 115-member organisation has been described as more akin to a Masonic lodge than a democratic body elected by and representing the interests of athletes and sports fans.

IOC members are chosen by President Juan Antonio Samaranch and the eleven-member Executive Board and can only be removed by the IOC itself. Those selected before 1966 serve for life and those selected after 1966 retire when they turn 80 (the IOC Executive raised the limit from 75 years just before Samaranch reached that age).

Samaranch has headed the IOC for the last 19 years. He joined Spain's fascist movement in his teens and was appointed that country's Sports Minister by General Franco in 1966. Current IOC members include ex-government sports ministers, retired military generals, a former defence minister in Ugandan dictator Idi Amin's regime, an ex-head of the South Korean secret service and a former member of the Stasi, East Germany's secret police.

One former IOC member has described the organisation thus: "It lives among itself. The members are like cardinals in the Vatican. Governments come and go, it doesn't matter to us."

In the late 1960s, increasing costs associated with the staging of the Olympic Games began to produce serious financial problems for the IOC. New international players, in the form of transnational corporations, began to enter the scene, anxious to use the event to promote their products. With the backing of major European and US businesses — Adidas, Coca-Cola and most importantly, giant media and television companies — Samaranch began to transform the Olympics.

After Los Angeles made a $215 million profit in 1984 by selling exclusive rights to various corporate sponsorship categories, a scramble began in earnest between cities for the right to host the Games and secure the profits that could be made in tourism, construction, transport and other industries.

From a small, nominally non-profit organisation, the IOC became a multi-million dollar enterprise, its members determining which cities and corporations would be granted access to massive profits through the Olympic Games. And, as competition between companies and cities increased, so too did the opportunities for bribery and corruption.

The intense scrutiny on the IOC in recent years demanded a modicum of change, and the organisation has tried to curtail some of its more blatant abuses of power.

But corruption allegations have continued to taint the Games.

Getting high on sport

Corruption hasn't been the only thing to threaten the Olympics integrity. Performance-enhancing drugs have been the bane of the Games for decades.

Since last year, a huge doping scandal has been unfolding in the US, sparked when a track coach anonymously sent a used syringe containing an unknown substance to the US Anti-Doping Agency. The ensuing scandal, centred around Balco Laboratories, has outed a host of internationally acclaimed track and field stars as drug cheats.

Just last month, US sprinter Kelli White's lawyer said that the disgraced sports star would name names in exchange for a shorter doping suspension. A report by drugs expert Dr Wade Exum further asserts that 19 American medalists were allowed to compete at various Olympic Games from 1988 to 2000 despite having earlier failed drug tests. Even five-time Olympic medalist Carl Lewis has been named.

Drugs in the Olympics first came to prominence in the 1970s, when the East German Government was accused of sponsoring cheating among its athletes.

Thousands of East German athletes were given performance-enhancing steroids, turning the country into a sporting powerhouse.

After the fall of the Berlin Wall in 1989, a number of athletes came forward to tell how they were given frequent doses of pills and injections of unknown substances. Kornelia Ender, who won four gold and four silver medals at the 1972 and 1976 Olympics, revealed she had started receiving injections at the age of 13.

One of the most famous incidents of a drug-enhanced performance was that of Ben Johnson. The Canadian athlete captured the imagination of the world in 1988, when he won the 100-metres title in a world record time of 9.79 seconds at the Seoul Olympics. The euphoria didn't last, however, when he tested positive for the anabolic steroid stanozolol.

Johnson was stripped of his gold medal and world record and banned from competition for two years.

Ireland got its own taste of shame eight years later. In the 1996 Atlanta Games, Michelle Smith won three gold medals and one bronze in the pool, easily making her the most successful Irish Olympian ever.

However, even then there were whispers her rise to the top of the swimming world had more to it than met the eye. In two previous Olympic Games, Smith's best result had been 17th in the 200-metre backstroke.

In 1993, she was ranked 90th in the world in the 400-metre individual medley, but after training with husband Erik de Bruin — a former Dutch discus thrower who was under a four-year suspension for failing a drugs test — she vaulted to 17th in the world by 1994.

In 1998, two drug testers showed up at Smith's home. The result shocked Ireland. Sporting body FINA found that her urine contained a level of alcohol that would be fatal if consumed by a human and that the sample must had been manipulated. They suspected that whiskey had been added as a masking agent. Smith was suspended for four years and doubt was cast over her Olympic wins.