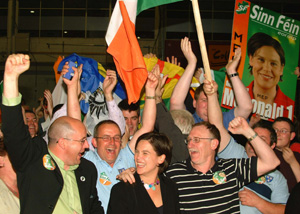 As new Sinn Féin councillors were elected throughout the 26 Counties, the scale of the party's growth across the island was registered most strongly in the EU election results. In the Six Counties, Sinn Féin polled as the largest nationalist party for the third consecutive election and Bairbre de Brún was elected as an MEP just hours after Mary Lou McDonald had become the party's first MEP in the early hours of Monday morning.

We always knew Dublin was a possible breakthrough constituency for Sinn Féin and so it transpired. Mary Lou McDonald came in third on the first count, with a massive 60,395 first preferences, less than a thousand votes behind Fianna Fáil's Eoin Ryan. Her vote share of 14.32% was significantly higher than the 12% poll predictions.

In the South, David Cullinane's 32,643 votes won Sinn Féin 6.74% of the vote. The Irish Examiner had Sinn Féin at 6%, while the Irish Times poll said 8%. Cullinane was eliminated after the fifth count. Sinn Féin polled 6.48% of first preferences in 1999.

A third Sinn Féin MEP seat seemed tantalisingly close all weekend, as tallies and counts laboured on. In the end, Pearse Doherty came in second on the first count, with 65,321 first preferences and 15.5% of the vote. In 1999, Sinn Féin polled 6.39% of first preferences in the then Connacht/Ulster constituency. The Irish Examiner and Times polls had put the Sinn Féin vote in the Northwest at 15%.

Doherty battled it out until the final count but was unable to close a 7,000 vote gap that had opened up between him and Jim Higgins.