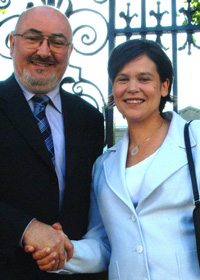 The Taoiseach's frank admission that the Government lost the election and that Sinn Féin were the winners was the most significant of all the commentary that has followed the local and European polls. It was Fianna Fáil's worst election since the 1920s and their TDs are worried about their seats. On Tuesday the backbenchers paraded to the plinth of Leinster House to talk to the media and blame the PDs for Fianna Fáil's election drubbing.

Fianna Fáil TD John McGuinness said the PDs would be better called the "Oppressive Democrats". Another FF backbencher, Brendan Smith said that what is needed is less Progressive Democrat policy. Conor Lenihan said the Government was perceived as right wing. And this followed the statement of unsuccessful EU candidate in the Northwest, Minister of State James McDaid, who said before the election that the Minister for Justice and President of the PDs, Michael McDowell, is "wired to the moon". But all the talk of a shift in direction and policy change is hot air. The same people and their colleagues have voted for PD-inspired polices all along the line since the Ahern/Harney coalition was formed in 1997.

The Fianna Fáil Parliamentary Party met on Tuesday night and more hot air was exhaled. There is discontent that Ahern's promised Cabinet reshuffle will not take place until September. But while some backbenchers will continue to make waves, many will be focused on their prospects for promotion. They will keep their thoughts to themselves. In the short term, some stand to benefit personally from the reshuffle as they are promoted into lucrative ministerial positions. In the longer term, others will be looking to a future leadership challenge, with factions already forming around the main rivals for the succession to Ahern — Foreign Affairs Minister Brian Cowen and Health Minister Mícheál Martin.

Hanging over them all, of course, is the danger to their Dáil seats in the next General Election. And the foremost challengers to many of those seats are Sinn Féin.

As Gerry Adams pointed out on Morning Ireland on Tuesday, it is all to the good if the rise of Sinn Féin forces this government to moderate some of their right-wing policies or deliver on some of their broken promises. This was Caoimhghín Ó Caoláin's theme when he challenged Ahern in Leaders' Questions on Wednesday. He asked the Taoiseach:

"What policy changes does the Taoiseach propose to introduce in response to the clamour from his backbenchers? How does he propose to reconcile their demands and his own assertion of opposition to privatisation, specifically in regard to Aer Rianta, with the assertion of the Tánaiste that tough decisions must now be taken, which we all recognise as shorthand for Progressive Democrats decisions that include wholesale privatisation? Will the Taoiseach tell us what policy changes in the health area his government proposes to introduce, having come to recognise the reality of people's concern and ire throughout the length and breadth of the State?

"In relation to health, we ask the Taoiseach to read the published report of the Public Health Alliance of Ireland, which clearly indicates and exposes once again the glaring inequality in health care, where 40% of people surveyed identified financial concerns as the real reason they cannot look forward to improved health. I ask him again what will he do about it? Will he provide medical card cover, most especially for all young people under 18 years of age? It is children who are suffering and parents who are facing the anguish of that choice every day."

But Ahern had nothing new to offer in return, and certainly no indication whatsoever that the promised extension of medical card cover to a further 200,000 people will even be begun during the remainder of this Government's term.

Fianna Fáil has got a bloody nose from Sinn Féin in this election and the Labour Party can only look on. The republican party succeeded in bringing out young working class people to vote in large numbers, something the Labour Party has signally failed to do. The irritation on the Labour benches is barely concealed. But instead of learning the lesson and seeking to build a real left alternative with Sinn Féin, the Greens and progressive independents, Pat Rabbitte is again looking to Fine Gael and promoting them as the only hope of an alternative government to a Fianna Fáil/PD Coalition. It was a reasonably good election for Fine Gael but, to paraphrase Mark Twain, just as reports of their demise were greatly exaggerated, so also are reports of their resurrection.

The media focus is all on the numbers game after the next General Election. Will Fine Gael, Labour and the Greens muster enough seats to form a coalition government? But a more important question is what their policy platform will be. There are major policy differences between them on key issues, like privatisation and Irish neutrality. But the media has yet to focus on this. The voters have a right to know.

Sinn Féin has laid out its policy stall very clearly during the election and for the past number of years, especially in the Dáil, but has received relatively little media coverage for its efforts. The party's success has suddenly led the media to ask about those policies and this is a most welcome development, even if they do often parrot Fianna Fáil and Labour nonsense about Sinn Féin having no policies.

This was Sinn Féin's best election in the 26 Counties since the 1920s. For the first time since the modern republican electoral strategy began in 1981, the Sinn Féin vote in the 26 Counties has now exceeded that in the Six Counties. That is hugely significant. It is a statistic that republicans and all other parties will be contemplating very carefully in the months ahead.