This is our time 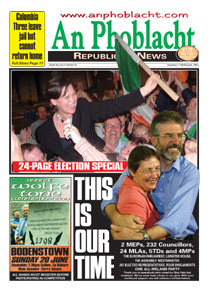 "We will go from here to ensure that the Good Friday Agreement is implemented in full and that people, the people who voted for me and those who did not, have a brighter future," said de Brún.

"Within the European Union we must endeavour to make the institutions more real for people here so they can feel part and parcel of the decision making," she said.

"We must move forward, promote the Peace Process and work for equality to create an Ireland of equals within a Europe of equals."

And the faces said it all. From the sunny smiles and summer attire of the Shinners, the party was clearly at ease with success. Sinn Féin had replaced the euphoria of initial breakthroughs with a gracious generosity to the party's electoral rivals and political opponents.

It's true that the traditional supremacist drumbeat had secured the DUP the majority of unionists who voted. But there was no doubt about it — Sinn Féin had secured the political centre of gravity. And the relaxed demeanour of the party leadership demonstrated this growing strength.

"It has taken Sinn Féin 20 years to replace the SDLP," said the defeated Morgan. His initial slip of tongue was revised later to "outpoll" but the truth was self evident even to the SDLP. "We can hold our heads high," said Morgan, conceding defeat in the European elections for the first time since 1979.

Mark Durkan promised SDLP members would be "rolling up their sleeves" and taking to the streets to build the SDLP's relationship with the electorate.

"You can't deal at a distance with the people," said Durkan, and borrowing a phrase from the DUP's lexicon, he continued: "We will not surrender."

Meanwhile, Gerry Adams was acknowledging the DUP candidate's electoral success. With a vote of 175,761, Jim Allister topped the poll, failing by a mere 17,000 votes to meet Ian Paisley's 1999 record. "We acknowledge and respect the DUP's mandate," said Adams. "We ask them to respect ours.'

But respect wasn't high on the list of the DUP's priorities. "Listen up Sinn Féin," bellowed Jim Allister. "You will never again enter an executive while you are allied to terror.

"Listen up," he warned the Ulster Unionists. "The days of pushover unionism are over.

"Listen up," he warned the SDLP. "Look at the price you have paid for cosying up to terrorists."

Demanding is, of course, one of the things the DUP does best, that and ignoring the operation of anti-Catholic/anti-Irish terror it has sponsored and promoted for decades. DUP leader Ian Paisley push'ed home the message to northern nationalists - reactionary unionism was "on the move" and "those in the minority had better awaken that a different day has dawned".

But as the DUP's ailing leader, accompanied by his supporters, struck up an impromptu rendition of the British national anthem, the DUP's "different day" seemed more like nostalgia for a return to a discredited past. "God save our.." Well, we've heard it all before and the tune and its sentiments are just as dreary as they ever were.

Sinn Féin's Gerry Adams and Martin McGuinness smiled benignly at the scene; let them have their moment of fun, their indulgent expressions seemed to say. It might be time to grow up but we can't expect too much all at once. Adams dismissed Allister's confrontational speech as a 15-minute soundbite.

Later, under the television studio lights of the BBC's Newsline programme Bairbre de Brún sat between Peter Robinson of the DUP and the UUP's Michael McGimpsey. Seated at the edge, Mark Durkan, apart from the occasional wide shot, remained mostly off camera.

As the two unionists traded insults across the table, Bairbre's impeccable manners ensured her composure. Wearing the now famous pink jacket, de Brún appeared the proverbial rose between two thorns. As the UUP and DUP locked horns, shouting each other down and branding each other the traitor, de Brún appeared to utilise the moment to reflect. It had been a glorious day.

Sinn Féin had almost polled twice as many votes as the SDLP. The party had beaten the UUP to take the second seat and was only a few percentages behind topping the polls. Sinn Féin had secured over 26% of the vote, compared to the British Labour Party's mere 22% across the water. And that was only within the Six Counties.

As the only All-Ireland party, Sinn Féin had trebled its representation in councils across the South, secured a second European seat and came close to winning a third. Bertie Ahern was reeling. Sinn Féin had succeeded in rocking the political establishment on both sides of the border.

"The DUP and UUP will work with Sinn Féin in Europe," said a confident de Brún and even Peter Robinson couldn't deny it.

Earlier in the day, Sinn Féin's election momentum had been described by one southern political commentator as a "juggernaut". His media colleague had been quick to correct him. It was more like a "runaway train", he said.