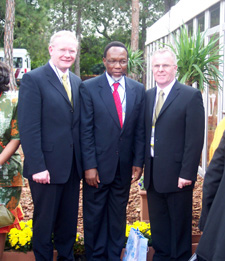 Martin McGuinness was in South Africa last week as a guest of the ANC at the inauguration of newly re-elected President Thabo Mbeki and for the celebrations marking the tenth anniversary of the ending of Apartheid. Nelson Mandela was elected the first president of a democratic South Africa on 8 May 1994.

Among others, McGuinness also met with President Thabo Mbeki and FIFA President Sepp Blatter and other officials. South Africa is bidding for the World Cup Tournament in 2010.