Riot squad have their May Day 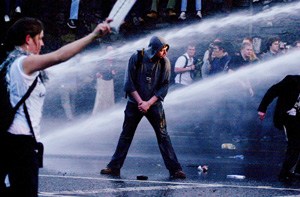 BY JUSTIN MORAN - There was something more than vaguely disturbing about watching Riot Squad Gardaí killing time on Saturday morning before leaving to cover the march organised by Another Europe is Possible on May Day. Perhaps it was the sheer number of officers gathered around vans in Croke Park's car park. Maybe it was the amount of equipment they had been issued, compared to what I knew would be the relatively unprotected demonstrators. More likely, it was their tendency to kill time by casually practicing repeated vicious downward swings of their batons that left me a little nervous as I headed into town.

By noon, a crowd of 400-500 people had assembled outside the Central Bank and numbers gradually grew as an array of speakers addressed the crowd on the need for radical change in Europe and to reject both the forthcoming referendum on citizenship and the proposed EU Constitution. The attitude of the media to the event was clearly demonstrated when an unidentified and silent masked protestor cycled up to the march to be immediately targeted by photographers. There were fierce exchanges between certain members of the media and outraged protestors, concerned that the papers would use this image to undermine the peaceful nature of the march.

Indeed, the actions of the establishment media in the run up to May Day came in for heavy criticism from a number of speakers. Sinn Féin's candidate for Dublin in the upcoming EU elections, Mary Lou McDonald began her speech by welcoming the ten new member states of the European Union, to loud applause. She went on to say, "Another Europe is possible, one where 68 million people are not living in poverty, where our public services are not systematically privatised and where Irish neutrality is protected from those people in Europe, and in Ireland, who wish to do away with it."

A statement was read out on behalf of Ográ Shinn Féin and there was an especially passionate speech from a representative of St Michael's Estate, whose residents are campaigning against the City Council's development plans for the area. The march then moved off at around 1.30pm in good order and good humour.

There was an extremely heavy Garda presence along the route and particularly at various intersections, while the march itself was constantly monitored by the Garda helicopter. A number of Garda officers filmed the march and were in turn filmed by protestors, but there were no reports of any clashes.

The size of the march had now swelled to over 2,000 from numerous community and political organisations. Noticeable by its absence from the march was the banner of the Dublin Council of Trade Unions, following the bizarre decision by the Council not to march on May Day because of unsubstantiated media reports. Trade unionist Jimmy Kelly from the ATGWU spoke from the platform and there were a number of members of the newly-formed Independent Workers Union present but apart from that the union presence was negligible.

At Heuston Station, the marchers were treated to a Carnival of Diversity, with various musicians and bands entertaining the crowd in the warm May sunshine, bringing to an end a successful and peaceful demonstration against the business-driven agenda of the European Union.

But the riot cops had yet to put their morning practice to use. Clashes took place later on that night on the Navan Road outside the Phoenix Park, where a small number of an estimated 2,000 protestors provided just enough justification for the Gardaí to let rip with the batons and show off their borrowed water cannon in action.

The pictures in the media the next day showed that the lightly dressed demonstrators had hardly arrived prepared for a fight, while the 23 people who appeared at a special court sitting in Cloverhill District Court were charged with the heinous crimes of breach of the peace, failing to comply with an instruction by a garda and one count of stealing a Garda hat and another of handling stolen property, a Garda hat.

This was hardly Genoa. Despite the endless media hype, there were no armies of Wombles and Dublin didn't burn but the Gardaí and army got to show off for their EU counterparts. It was over the top, as was a lot of the media coverage, and bodes ill for fair coverage and policing of protests against the visit of US President George Bush, who is due to arrive in Dublin on 25 June.