Starting to frame the New Ireland 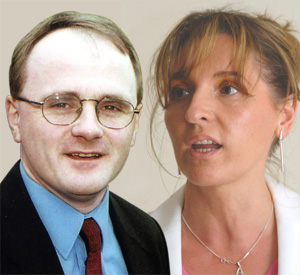 What is the New Ireland to look like? What should the institutions of government be? How can we bring about an Ireland of Equals? They are the key questions in front of us today? The process of seeking answers to them is the same process as will bring it about, because it is a discussion that needs to involve all the people who live here.

Republicans have a special place in these discussions, if only because we are the sole all-Ireland party, which historically has opposed the injustices and inequality that being an outpost of British imperialism has brought upon us. But our mission to win separation and achieve a new Ireland can only be successful if, for a change, all the people are engaged in determining the character and the form they want this New Ireland to take.

Sinn Féin's role at this juncture of transition is to facilitate this discussion in as wide a consultation as it is possible to achieve. Whatever the form this New Ireland will take, it cannot be imposed by any minority.

This month, Sinn Féin launched a paper, Expansion of All-Ireland Institutions and Areas of Work. It sets an agenda for framing discussion in the current context of the Good Friday Agreement. It shows the way to begin this work and how it may be taken forward.

It may be drip feed, but an all-Ireland agenda is moving forward. Driven by the inevitable logic of the times and the dictats of economic and social advantage, civil servants, quietly but determinedly, are developing the work of the all-Ireland institutions. They are doing this in the areas of co-operation between Ministers and their departments, and through the Implementation Bodies (IBs), on the boards of which Sinn Féin has representation.

These developments are reviewed in the Sinn Féin paper. Taken alone they may appear trivial, like for example the establishment of Universities Ireland, which links all nine Irish universities to promote cooperation and collaboration, but all are little steps, adding up the detail to developing institutions for re-unification.

But republicans aren't working to build a united Ireland that will merely be an extension of the corruption, discrimination and inequality that defines the 26-County state. And yet, this is the united Ireland which is, however slowly, under construction. This paper is part of the why and the how of subverting this unspoken agenda.

As republicans know, the Good Friday Agreement is not 'our' document. Nevertheless, it contains and even embodies ideas for the framework of all-Ireland governance that transcend any particular set of institutional arrangements: some of the ideas contained have a value far beyond the specifics of the Agreement.

An All-Ireland Charter of Human Rights would set out rights protested by law and regulate government to be in accordance with these rights.

As this paper puts it: "Sinn Féin believes the All-Ireland Human Rights Charter should assert, as in South Africa, comprehensive social, economic, political, civic and cultural rights. Dynamic human rights provisions are aids to developing sound public policy. They also act as regulative points of reference to ensure government initiates the legislative and other measures required to meet its responsibilities.

"This template of a human rights framework must be enforceable and provide the means through which the deprived and socially excluded may assert, attain and protect their human rights."

Then there is provision for an All-Ireland Consultative Forum, involving the social partners and those who work at the coalface to bring social justice. As the Sinn Féin paper says:

"Irish people in the two states, who suffer discrimination in such areas as housing, health, education, employment and social services, are entitled to redress and justice. These vital issues are given a platform by the All-Ireland Consultative Forum. The Forum has an essential role in advising the All-Ireland Ministerial Council on the implementation of an all-Ireland anti-poverty and social inclusion strategy."

These institutions are not neutral in relation to developing an Ireland of Equals; they embody the very agenda itself. They do not exist yet and they will not exist just because we are calling for them — they have to be built through the engagement of civil society in the project of framing the new Ireland.

The Good Friday Agreement has established institutions of all-Ireland government — the areas of Ministerial Co-operation and the All-Ireland Implementation bodies. The Sinn Féin paper is primarily about each of these areas and bodies, looking at their work so far and the difficulties they have encountered. It proposes ways in which that work should be expanded and developed to foster and exploit our national and social economic resources, which have been so neglected across the entire island and stunted by the artificial border that partitions this country.

Economic, political and social reconfiguration on an all-Ireland basis holds out the prospect of substantial opportunities for development. Obvious examples are in the fields of agriculture, marine tourism (with navigable waterways across Ireland), inshore and offshore fishing and fish farming and alternative energy sources of production.

For example, scientists have suggested that exploiting Ireland's wave power could meet the energy requirements of all of Europe over coming decades. It is an exciting proposition, which the current administration is incapable of developing, still less, developing for the benefit of all the people of our island.

Another clear example is the development of the Information and Communications Technology sector, with its huge potential for all-Ireland trade and worldwide exports.

A prerequisite of developing these resources is the involvement of those engaged in these sectors in the decision-making process. This is also the key to the development of the social economy as the motor to spur economic growth.

The very notion of engaging communities in defining their needs and securing the provision of essential services is key to building an Ireland that meets the needs of the disadvantaged in rural and urban areas.

No one knows better than those who are involved themselves in the fields of, for example, language and culture, or rural development, what provision is needed in the new Ireland. No one knows better the nature of the disadvantage suffered than those who live in the border corridor areas — the waste of resources with two separate administrations on either side of a 'border' that divides nothing in reality.

There are countless examples in border counties alone of opportunities for social economy projects that could be developed through the new Implementation Bodies Sinn Féin is proposing. For example, there's a wonderful cooperative project between Derg and Finn communities, linking Donegal and Tyrone, sharing experiences and aspirations of carer projects based around senior citizens and people who are living in outlying rural areas without support.

The Sinn Féin paper also calls for new areas of co-operation (in the areas of Community Development, Art and Heritage, Economic Cooperation and Public Investment). It also calls for the development of the existing Implementation Bodies, and for eight new ones, in the fields of Justice and Policing, the Social Economy, Energy, Rural Development, Pollution Control, Further and Higher Education, Mental Health and Communications.

And it calls for an expansion of the role of the Cross-Border Corridor Groups, which are composed of social partners, statutory agencies and elected council representatives. These, it advocates, should have a more strategic role in developing guideline plans and funding opportunities to bring about social inclusion.

The paper offers a framework through which to engage the Irish people in a discussion on how they see their areas of interest should be taken forward as we progress towards re-unification on the basis of an Ireland of equals.

We need to see wide discussion so that the new Ireland meets people's needs and aspirations. There is no better way than to go and ask them.

The paper is about how to structure this engagement, how to build this community for re-unification.

• Sinn Féin has proposed a Charter of Human Rights, titled Rights for All, for discussion. Everyone is encouraged to access this document on the party's website www:sinnfein.ie and to offer views