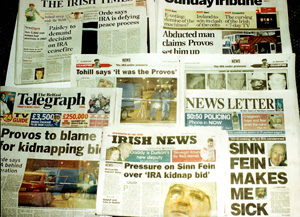 Have you ever thought you must have fallen asleep and woken up in Never-Never Land? But in this particular dream fantasy world, the all time bogeyman and frightener of small children, Captain Hook, has donned Pan's tights and is busy disporting himself as the hero of the story. Just such an air of unreality permeated the political landscape this week.

While Ian Paisley arguably shares many of the theatrical attributes of the Captain, as leader of the DUP he surely heads a party that has never grown up. But it all began with that political pirate and PSNI Chief Hugh Orde firing both cannons from the Port Bows.

Now, post RUC, this particular Chief Constable would like us all to believe that he is just the archetypical British copper simply doing his job. And interfering with the political process? Well that would be more than his job's worth.

That's why, hours after the arrest of four men on the outskirts of Belfast city centre, Orde immediately announced to the press that the PSNI had foiled a 'kidnapping' and he alleged it had undoubtedly been the work of the IRA.

"The activity last night was PIRA, I'm clear on that," said Orde. The 'kidnap bid' had raised new questions about the IRA's cessation, said the Chief Constable.

And just in case his message wasn't clear, Orde spelt it out the following day. "Orde says IRA is defying peace process," reported the Sunday Times in an interview with the Chief Constable.

"A number of [IRA] operations are going on in defiance of the Belfast Agreement, which suggests they should now have stopped. The implications of this are for others [to determine]," said Orde.

Now it's important to get this straight. Four people were arrested at the scene of what Orde immediately described as a "serious crime". A further three people were arrested in what the PSNI called a follow-up operation but all three were later released without charge.

The original four appeared at Belfast Magistrates Court three days after their arrest. Despite earlier claims by the PSNI, none of the four were charged with IRA membership.

A section of the media has already admitted that the other charges against the four are unlikely to stand and the case will be eventually dropped.

A source speaking on behalf of the IRA leadership has told An Phoblacht that, "the IRA did not authorise any action against Bobby Tohill".

In announcing the incident to the media, Orde had insisted he was not stepping outside his jurisdiction as a police officer. Such matters were "for political representatives to debate", he said. But within 24 hours we had moved swiftly from an incident involving a handful of arrests, through to questioning the IRA ceasefire, on to suggesting republicans had placed the entire Peace Process in jeopardy.

The show was on the road and anti-Agreement protagonists on both sides of the border were eager to play their part.

"Paisley to demand decision on IRA ceasefire," reported the Irish Times. "It is clear the IRA remains a fully armed and active terror machine that has no intention of leaving its violent, murderous and criminal activities behind," said Paisley.

"Freeze them out," thundered the Newsletter front-page headline two days later. "That was the broad unionist consensus towards Sinn Féin last night as the governments dithered in the wake of the weekend Tohill incident.

"With governments signalling that there was no mechanism to exclude Sinn Féin, UUP leader David Trimble said his party would not talk to the republicans and he called on others to do the same."

Meanwhile, the SDLP were being told to be "manly instead of childish" by Ian Paisley Junior, who urged the SDLP to "let go the hand of Sinn Féin". Sinn Féin were "not fit for government" he said and the SDLP needed to "stop kidding around".

"Alleged IRA abduction may jeopardise talks," said the Irish Times, determined to support the DUP agenda of disenfranchising the majority of northern nationalists.

And just in case the reader hadn't fully appreciated the seriousness of "the incident" the Irish Times was there to point it out. "The incident has the potential to destabilise the efforts to restore devolution and could jeopardise what is perceived as a tentative willingness by the DUP to share power with Sinn Féin."

A perceived tentative willingness? Well, clearly no one was willing to overstate the case. Now let's just pause a moment to consider what is being said here. The Irish Times contends that the action of four people on the outskirts of Belfast city on Friday night has jeopardised the entire political enterprise of power sharing and conflict resolution.

The 'crisis', we are told, is in the jeopardising of the 'perceived tentative willingness' - 'perceived' - 'tentative' - 'willingness' - of the DUP to share power with the democratically-elected party of the majority of northern nationalists.

So maybe - just maybe the DUP were thinking just a little bit about sharing power with nationalists in some kind of political forum unionists could dominate. And now they might not. For a moment there I thought this was serious.

Now let's just leave Never-never-land for a moment (or to borrow Ian Paisley's own words, Never! Never! Never-Land) and imagine that the DUP might actually be an extreme right wing fundamentalist party with a history of anti-Catholic bigotry and an anti-Irish ethos. This is a party with a history of opposition to power sharing that has trumpeted its main objective as bringing down the Good Friday Agreement and restoring unionist domination by excluding the vast majority of nationalists.

In such circumstances could it be possible that this so-called crisis is a bit of an excuse?