Sinn Féin will not be made a whipping boy 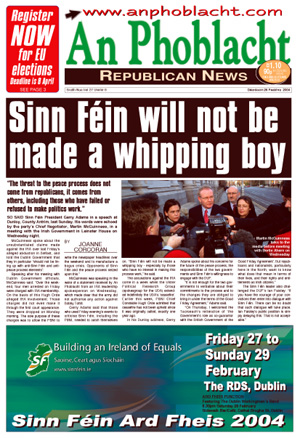 "The threat to the peace process does not come from republicans, it comes from others, including those who have failed or refused to make politics work."

So said Sinn Féin President Gerry Adams in a speech at Dunloy, County Antrim, last Sunday. His words were echoed by the party's Chief Negotiator, Martin McGuinness, in a meeting with the Irish Government in Leinster House on Wednesday night.

McGuinness spoke about the unsubstantiated claims made against the IRA over last Friday's alleged abduction in Belfast, and told the Dublin Government that they in particular "should not be lining up with anti-Sinn Féin and anti-peace process elements".

Speaking after his meeting with Dublin Government officials, McGuinness said: "Over the weekend, four men arrested on Friday were charged with IRA membership. On the basis of this Hugh Orde alleged IRA involvement. Those charges did not even make it through the first court appearance. They were dropped on Monday morning. The sole purpose of these charges was to allow the PSNI to write the newspaper headlines over the weekend and to manufacture a bogus crisis. Opponents of Sinn Féin and the peace process seized upon this."

McGuinness was speaking in the wake of a statement received by An Phoblacht from an IRA leadership spokesperson on Wednesday, which made clear that the army did not authorise any action against Bobby Tohill.

Gerry Adams said that those who used Friday evening's events to criticise Sinn Féin, including the PSNI, needed to catch themselves on. "Sinn Féin will not be made a whipping boy - especially by those who have no interest in making this process work," he said.

The accusations against the IRA come in a week when the Ulster Political Research Group (spokesgroup for the UDA) extended indefinitely the UDA's 'ceasefire'. Earlier this week, PSNI Chief Constable Hugh Orde admitted that ceasefire has not been upheld since it was originally called, exactly one year ago.

In his Dunloy address, Gerry Adams spoke about his concerns for the future of the peace process, the responsibilities of the two governments and Sinn Féin's willingness to engage with the DUP.

"It is not enough for the two governments to verbalise about their commitments to the process and to the changes they are obliged to bring in under the terms of the Good Friday Agreement," Adams said.

"On Thursday, I welcomed the Taoiseach's reiteration of 'the Government's role as co-guarantor with the British Government of the Good Friday Agreement'. But republicans and nationalists, particularly here in the North, want to know what does that mean in terms of their lives, and their rights and entitlements as Irish citizens."

The Sinn Féin leader also challenged the DUP's Ian Paisley: "If you have the courage of your convictions then enter into dialogue with Sinn Féin. There can be no doubt that such dialogue will take place. Ian Paisley's public position is simply delaying this. That is not acceptable."