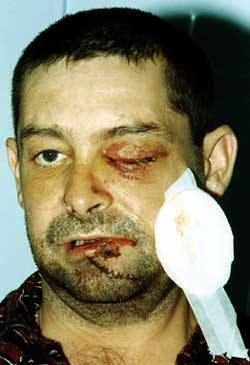 Denvir lost an eye and suffered serious head injuries when he was attacked by a gang of loyalists armed with hammers and machetes as he left the Boundary Bar on the Shore Road on 16 November last year.

A group calling itself the Loyalist Action Force, a cover name used by the UDA, claimed responsibility for the sectarian attack.

Dallas, a 23-year-old machine operator from Coolederry Gardens in the loyalist Rathcoole estate, Newtownabbey, was remanded in custody for a month but his solicitor said he would be applying for bail.

Commenting on the charge, Sinn Féin councillor Briege Meehan said it was about time the PSNI started to take attempted killings of Catholics seriously.