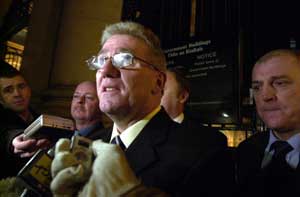 As a loyalist delegation from the Ulster Political Research Group, the mouthpiece of the UDA, travelled to Dublin to meet Bertie Ahern on Monday 26 January, residents of the small nationalist enclave of Ligoniel in North Belfast held a protest to highlight ongoing UDA attacks on families and property in the area.

Among the UPRG delegation was Jackie McDonald, the UDA's South Belfast Brigadier, whose area of control covers the Donegall Road and Village areas, which have seen the intensification of racist attacks over the Christmas and New Year.

As residents took to the streets and blocked the main Ligoniel Road, they handed over a dossier to An Phoblacht that listed the details of over 38 sectarian attacks in the area over the past four months, including incidents where loyalists have attempted to kill a number of residents.

As recently as 17 January, a local couple escaped serious injury when a gang of loyalists attacked their car with bottles. Although the incident occurred in an area covered by CCTV, the PSNI said they knew nothing of the attack.

Also in January, local nationalist youths were fired upon by loyalists, using what may have been a pellet gun, as they walked up the Ligoniel Road. In December a schoolgirl was punched in the face by loyalists as she made her way to school.

One of the more serious incidents to have occurred during this spate of attacks occurred on 24 November last year when loyalists, using a Shogun jeep and two cars, tried to kidnap a nationalist youth. Also in November, loyalists drove a car at a local youth as he stood outside a local Chinese takeaway. The car crashed into a parked vehicle and two men wearing loyalist band uniforms ran away from it.

The dossier further reveals numerous attacks on homes and property, with windows smashed and sectarian graffiti daubed on the walls of the local Catholic church.

Taoiseach Bertie Ahern and the UDA's political representatives said they would remain in contact after their meeting on Tuesday night 26 January but Sinn Féin's Gerry Kelly said the UDA had orchestrated a campaign of sectarian hatred against Catholics.

"The Irish government needs to tell the UPRG that the ongoing UDA campaign against Catholics on the Six Counties has to end," he said.