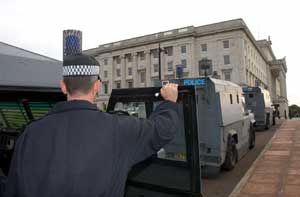 Remember the fictional "IRA spy ring" that stood accused of copying or stealing confidential documents from Castle buildings and the "evil republican plot", cited by unionists and the British state alike as the dramatic reason for the fall of the devolved Assembly in 2002?

Well, more than a year later, the Director of Public Prosecutions has revealed that it has officially dropped half the charges against those arrested. Not a single person now stands accused of the offence of possessing "documents of a secret, confidential or restricted nature originating from government offices".

The "spying" allegations were initially brought by the PSNI's Special Branch REMIT team back in October 2002, during a top-secret "operation" codenamed "Torsion".

"Torsion" led to a series of calculated and high-profile public PSNI raids on Sinn Féin's Stormont offices and the homes of local party members and supporters, with the PSNI announcing that it had uncovered a "high-level IRA spy ring" operating within Government Buildings.

Before the political witch-hunt was over, four people had been arrested for "possession of information useful to terrorists," including Sinn Féin's Head of Administration, Denis Donaldson. Then First Minister UUP leader David Trimble pronounced the affair "bigger than Watergate", while a unionist chorus warned that there were "huge implications" for the peace process. Soon afterwards, the North's power-sharing executive collapsed, with Sinn Féin being blamed for its downfall.

The four accused - Denis Donaldson, Ciaran Kearney, William Mackessy and Fiona Farrelly - faced a total of 14 offences after the Special Branch operation, but the DPP admits that number has now been slashed to seven, with the charges against Fiona Farrelly dropped in their entirety on 17 December last.

Additionally, none of those arrested has been charged with IRA membership, or the possession of the personal details of 1,400 prison officers - which the Prison Officers' Association has cited as the basis for its demands for increased security protection from the NIO.

Despite considerable delays, the outstanding charges are now to be put to the three remaining defendants during a preliminary hearing on 4 February.

Sinn Féin West Belfast MLA Michael Ferguson says the developments in the case "give the lie - once and for all - to the spurious and outrageous allegations that republicans were involved in some mythical spy ring.

"Sinn Féin has consistantly said that the agenda of the PSNI - and Special Branch in particular - was nothing more than an anti-Agreement agenda," said Ferguson this week. "These cases were used as a pretext for anti-Agreement securocrats to ensure that their desire to pull down the political institutions was fulfilled.

"These latest developments very clearly expose the partisan political policing that still exists within the PSNI. The force within a force prevails and Sinn Féin believes that the ongoing nature of these - and other cases - proves the need for proper accountability to be enforced within the North's policing and criminal justice system.

"Quite clearly we have a long way to go to reach that goal."