Opportunity to accelerate process of change 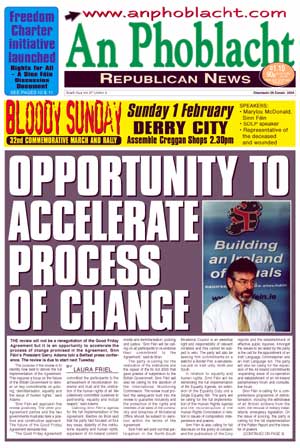 The review will not be a renegotiation of the Good Friday Agreement but it is an opportunity to accelerate the process of change promised in the Agreement, Sinn Féin's President Gerry Adams told a Belfast press conference. The review is due to start next Tuesday.

"The purpose of the review is to identify how best to deliver the full implementation of the Agreement. This requires a focus on the failure of the British Government to deliver on key commitments on policing, demilitarisation, equality and the issue of human rights," said Adams.

"Sinn Féin will approach this review positively. The other pro-Agreement parties and the two governments must also take a positive and constructive approach. The future of the Good Friday Agreement demands this.

"The Good Friday Agreement committed the participants to the achievement of reconciliation, tolerance and trust and the vindication of the human rights of all. We collectively committed ourselves to partnership, equality and mutual respect," said Adams.

Outlining Sinn Féin's agenda for the full implementation of the Agreement, Bairbre de Brún said that the party had focused on four key areas, stability of the institutions, equality and human rights, expansion of All-Ireland commitments and demilitarisation, policing and justice. "Sinn Féin will be calling on all participants to re-endorse their commitment to the Agreement," said de Brún.

The party is calling for the restoration of the institutions and the repeal of the NI Act 2000 that gave powers of suspension to the British Government. Sinn Féin will also be calling for the abolition of the International Monitoring Commission. The review must protect the safeguards built into the review to guarantee inclusivity and the protection of the rights and interests of all sides of the community and breaches of Ministerial Office should be subject to sanction within the terms of the Agreement.

Sinn Féin will point out that participation in the North-South Ministerial Council is an essential right and responsibility of relevant ministers and this cannot be subject to veto. The party will also be seeking firm commitments on a date for a Border Poll, a simultaneous poll on Irish unity, North and South.

Sinn Féin is also calling for full disclosure on the policy of collusion and the publication of the Cory reports and the establishment of effective public inquiries. Amongst the issues to be raised by the party is the call for the appointment of an Irish Language Commissioner and an Irish Language Act. The party will also be calling for the expansion of the All-Ireland commitments -expanding areas of co-operation and establishment of an All-Ireland parliamentary forum and consultative forum.

Sinn Féin is calling for a comprehensive programme of demilitarisation, including the withdrawal of all British soldiers from the north, the removal of military installations, emergency legislation. On the issue of policing, the party is calling for the full implementation of the Patten Report and the transfer of powers.

Meanwhile, the meeting between Bertie Ahern and Ian Paisley, scheduled for today in the Irish Embassy in London, has been described as 'historic' but no commentator is holding out much hope for a political breakthrough. It isn't the first meeting between the two. Paisley met Ahern two years ago in his guise as the Free Presbyterian Church's Moderator. Neither is it the first time a member of the DUP has visited the Irish Embassy.

A spokesperson said that the Dublin Government hoped the meeting would normalise relations with the DUP. Ian Paisley insists that the meeting will address "the relationship between north and south and not the internal matters of Northern Ireland".

For Alex Kane, writing in the Newsletter, it was "a typically blunt way of proving to the media and to the DUPs new voters and members that he was still in charge of the party he founded". The decision to head every delegation in the forthcoming talks process, said Kane, was another slap in the face for his long time deputy, Peter Robinson. Paisley was determined to thwart "the growing pragmatism of the Robinson wing" and ensure that his party is not "polluted by the influence of UUP defectors."

But on the other hand, the DUP was still happy to parade Jeffrey Donaldson and his fellow defectors at a Lisburn Orange Hall. To a packed meeting, Donaldson described the electoral rise of Sinn Féin as "a clear and present danger" to the Union.

"The electoral rise of Sinn Féin is no longer something which we can worry about in the distant future," he warned. "Stopping Sinn Féin from becoming the predominant political party in the Province at the next election is now the duty of every unionist. Stopping Sinn Féin can only be achieved by voting for the Democratic Unionist Party."

But Donaldson's former colleagues were declaring themselves "bored and disinterested" in the comments of their former members. "The Ulster Unionist Party has moved on," said UUP Assembly member Billy Bell. "We would urge them to do the same."

Bell insisted that "stagemanaged" attempts to destabilise the UUP over a handful of defections were futile. Indeed, according to Bell, Donaldson's decision to leave the UUP, far from damaging the party, has enhanced the number of those seeking membership.

"These are people who have made it clear that they feel in a position to join the party now that Mr Donaldson has left," said Billy, demonstrating a remarkable ability as a fantasist reminiscent of his literary namesake, Billy Liar.

His party leader, David Trimble addressing a Strangford Unionist Association meeting, was also expressing "pleasure" at the antics of the DUP. Accusing the DUP of lying and hypocrisy, Trimble wondered "if the DUP vote would have been so high if they had told the electorate that the U-turn on sitting down with Sinn Féin would begin immediately after the election?"

Commenting on the DUP proposal of a voluntary coalition between unionists and nationalists, Trimble pointed out that finding a nationalist partner might pose a very real problem. "There are only two nationalist parties elected to the Assembly, Sinn Féin and the SDLP. Will the SDLP be prepared to enter an administration as the junior party to the DUP to the exclusion of Sinn Féin?" It would not happen said Trimble.

"After 1998, it became clear that there were virtually no circumstances in which the SDLP would agree to the exclusion of Sinn Féin," the UUP Leader said. Meanwhile 30 members of Trimble's constituency association resigned citing a lack of confidence in his leadership.

"Trimble has moved away from basis Ulster Unionist principles and no longer represents the majority of grassroots traditional unionism," said a former vice chair of the Upper Bann association, Garfield Gilpin.

"The wheels are falling off the machine. We are probably looking at several branches facing closure. A large section of the party is removing itself from the party and if enough leave, the party will collapse. Economically, it will not be viable."