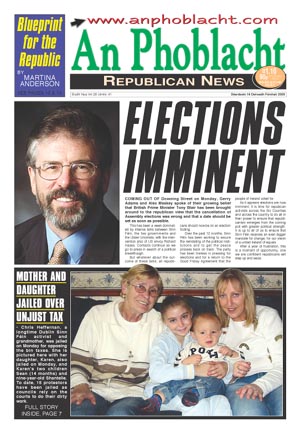 Coming out of Downing Street on Monday, Gerry Adams and Alex Maskey spoke of their growing belief that British Prime Minister Tony Blair has been brought around to the republican view that the cancellation of Assembly elections was wrong and that a date should be set as soon as possible.

This has been a week dominated by intense talks between Sinn Féin, the two governments and the Ulster Unionists, with the intervention also of US envoy Richard Haass. Contacts continue as we go to press in search of a political breakthough.

But whatever about the outcome of these talks, all republicans should now be on an election footing.

Over the past 12 months, Sinn Féin has been working to secure the reinstating of the political institutions and to get the peace process back on track. The party has been tireless in pressing for elections and for a return to the Good Friday Agreement that the people of Ireland voted for.

As it appears elections are now imminent, it is time for repubican activists across the Six Counties and across the country to do all in their power to ensure that republicanism emerges from the coming poll with greater political strength. It is up to all of us to ensure that Sinn Féin comes out of this election with an even bigger mandate for change, for our vision of a united Ireland of equals.

After a year of frustration, this is a moment of opportunity, one we are confident republicans will seize.