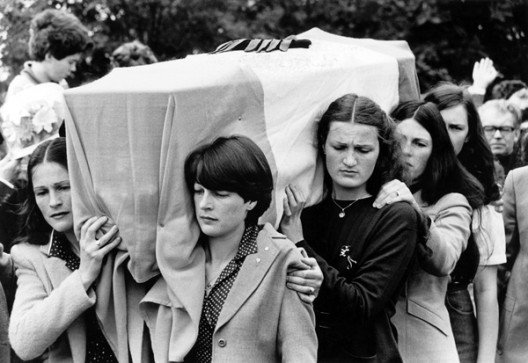 THOMAS McELWEE, aged 23, was born in Bellaghy, south Derry, on 30 November 1957. Thomas was arrested following a premature explosion in an IRA operation in October 1976 in which he lost the sight of one eye. His younger brother, Benedict, was arrested in the same incident. Thomas received a 20-year sentence in September 1977.He spent 62 days on hunger strike from 8 June. He died on 8 August 1981. Free article

‘Time to support health care, not the wealth care of bankers and developers’– Mayor Cora Harvey

DONEGAL Mayor Cora Harvey of Sinn Féin has paid tribute to the 5,000 people who took to the streets around Letterkenny General Hospital in August to protest against health cuts.

Among the many community, voluntary, campaign and trade union groups on the march... Free article

COMMUNITY SAFETY is the biggest challenge facing residents in west Belfast. We are all frustrated with anti-social behaviour and criminality, which most of us have directly experienced.

The question is: how are we collectively going to reduce this activity and improve the safety of our communities and the quality of life for local residents?

SDLP leader gets it wrong on intelligence

SINN FEIN’S spokesperson on policing, Alex Maskey, has rejected the ludicrous suggestions by SDLP leader Margaret Ritchie that Sinn Féin is in any way responsible for the recent actions by so-called ‘dissidents’.
The South Belfast MLA was responding after the SDLP leader accused intelligence operations in the North of “getting nowhere” after a device planted in a wheelie bin... Free article

FROM September 2010, Medical Card patients in the 26 Counties will be forced to pay a charge per item on their prescriptions for the first time.

The most remarkable yet least noticed aspect of the closure of the Dáil and Seanad for the summer was the passing of legislation that undermines the Medical Card scheme and imposes these prescription charges. While there were... Free article

THE relocation of the Rapid Response Vehicle from Monaghan to Castleblayney is putting the lives of patients in north Monaghan at risk, says Sinn Féin Councillor Brian McKenna, a member of the Dublin/North-East Regional Health Forum.

He said that the North-East Transformation document drawn up prior to the removal of acute medical cover from Monaghan General Hospital promised an... Free article

The People’s Supermarket – Shoppers of the world unite!

YET another store opened its doors in the past few weeks, selling an array of items from organic muesli and recycled toilet paper to ecological soap and fair-trade coffee. Its enthusiastic staff, sporting eye-catching bright yellow T-shirts,  work the tills and replenish the shelves. There... Free article

IN August 2009 Coiste Na n-Iarchimí launched its Education and Training Bursary Scheme, which has to date assisted almost 500 former political prisoners and immediate family members with costs towards their education or training.

These bursaries are funded by the EU Peace 3 Programme under the European Regional Development Fund through SEUPB and are available to those who need... Free article

The children speak out

‘THE BALLYMURPHY MASSACRE’ is the name given to the murderous rampage in the 36 hours after the introduction of internment in August 1971 when 11 civilians – 10 men, including a local priest, and a mother of eight children – were killed by the British Army’s Parachute Regiment. The same regiment went on less than six months later to gun down 14 civil rights... Free article