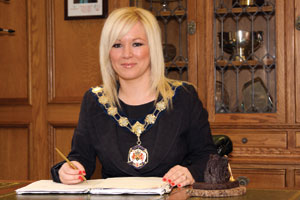 DUNGANNON has got its first-ever female Mayor with the election of Sinn Fein Councillor Michelle O'Neill to be its First Citizen. Michelle, an MLA for Mid-Ulster and Deputy Chair of the Assembly Health Committee, is one of only two women councillors on the 22-member Dungannon and South Tyrone Borough Council.

Tallaght Sinn Féin Councillor Seán Crowe’s motion deplored the failure in Tallaght Hospital to read thousands of X-rays and process thousands of GP referral letters. It also called for an end to the two-tier public/private hospital system and for the development of a new single-tier system with access for all based on medical need alone.

Speaking after the motion was passed, Seán Crowe said:

“Only the establishment of a new single-tier healthcare system with access for all based on medical need alone can truly get rid of the inequalities that have plagued our current system and led to scandals such as that at Tallaght Hospital.

“For that to happen we need to see a move away from the conservative political parties and the emergence of a new era of progressive politics.”

THE completion of a Wicklow County Council probe into the deaths of two firefighters in Bray three years ago has brought renewed calls from Sinn Féin Councillors John Brady and John Snell for an independent investigation into the tragedy.

Brian Murray and Mark O’Shaughnessy died when the roof of a disused factory collapsed on top of them in September 2007.

Councillor John Brady explained why the Sinn Féin councillors were looking for an independent examination of all the facts.

“The value of the council’s investigation is highly questionable given that the council itself is under investigation by both the Garda and the Health and Safety Authority in relation to this very issue.”

The local Sinn Féin organisation has, along with the families of Brian Murray and Mark O’Shaughnessy, been calling for a full independent investigation in the deaths of the two part-time firefighters and a review of the fire services in County Wicklow, including the vetting of emergency calls.

“SECTARIANISM is alive and well on Newtownabbey Council” Sinn Féin MLA Gerry Kelly has said after the DUP gifted 12 of the 14 important committee posts on the council to all of their councillors.

“Not only have the DUP awarded 12 of their councillors important committee positions they’ve made independent loyalist Tommy Kirkham deputy mayor and given one token position to the Alliance Party.”

This move comes after all the parties on Newtownabbey Council, including the SDLP and Alliance, rallied under “a DUP-organised coup” to deny Sinn Féin voters their right to elected representation following the resignation of the only Sinn Féin councillor in Newtownabbey.

“This denied the 1,800 Sinn Féin voters the representation they voted for and were entitled to,” Sinn Féin said.

COOKSTOWN District Council has endorsed a Sinn Féin motion in support of an international public inquiry into the events surrounding the Israeli assault on the humanitarian aid flotilla to Gaza.