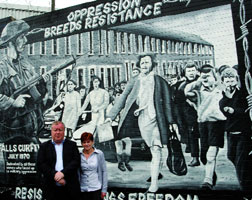 MURAL IN MEMORY: Rita Doherty with Robert ‘Dinker’ McClenaghan at the new Falls Road mural dedicated to the memory of the events in July 1970 when the British Army, under orders from the unionist regime in Stormont, imposed a military curfew on the Lower Falls area of Belfast. Robert is the chair of the commemoration committee and Rita, a young girl at the time, saw her uncle Patrick shot dead by British soldiers. Her father was also wounded by British Army rifle fire. The curfew was broken after three days when women from throughout Belfast forced their way through British barricades, bringing much-needed food to the beleaguered residents.

THE 40th anniversary of a series of key moments in the history of the struggle will be remembered in Belfast this summer through a series of events organised across the city.

The Defence of Ardoyne, the Battle of St Matthews and the Falls Road Curfew, all distinct in their own right, were also part of an escalation towards conflict that culminated in the British Army’s massacre of civilians on Bloody Sunday less than two years later.
Before Bloody Sunday, the relationship between the Northern nationalist community and the British Army was ambivalent; after Bloody Sunday it was not. But although the events in Derry in 1972 marked a turning point, indications of what was coming were already emerging in Belfast in 1970.
The British Army had arrived on the streets of Derry and Belfast in August 1969 amidst some of the most notorious sectarian attacks against nationalist communities in the history of the Orange state. The Battle of the Bogside and the burning of Bombay Street were the context within which British troops were deployed, ostensibly to relieve beleaguered nationalist communities under attack from the RUC in Derry and Orangemen in Belfast.
And it’s true that, while republicans were rightly sceptical of the reasons given by the British Government in deploying its troops in Ireland, some nationalists welcomed British soldiers in the hopes that they would protect them from the excesses of the Orange state.
In 1970, the Orange marching season, the time of year when traditionally anti-Catholic violence and sectarian pogroms against nationalist communities were most intense, would be the litmus test for this hypothesis. Republicans, of course, were taking no chances and, having learnt the lessons of ‘69, were better prepared to defend Catholic areas.
In the summer of 1970, when the Orange Order attempted to march along the nationalist Springfield Road in west Belfast, they were met with a huge crowd who had gathered to prevent them. The route still bore all the scars of the Orangemen’s incursion of the year before, row after row of Catholic homes, derelict and abandoned.

With the focus ON west Belfast, the north of the city was not expecting any trouble. But having been deterred from marching onto the Springfield Road, hundreds of Orangemen crossed through the loyalist Woodvale area onto the Crumlin Road to attack Catholic homes on the edge of Ardoyne.
The route may not have been ‘traditional’ in the Orange Order sense but in attacking Catholic houses in the Hooker, Herbert and Brookfield Street area, Orangemen were returning to a place they had almost destroyed the previous summer. But one year later everything had changed and changed utterly.
The IRA O/C during the H-Block Hunger Strike of 1981, Bik McFarlane, was born and reared in Ardoyne. Speaking to An Phoblacht, he described the events and significance of 1970.
“When loyalist mobs attacked Ardoyne in ‘69 people had very little with which to defend themselves. But in June 1970, when hundreds of loyalists descended on Ardoyne and then opened fire, republicans were prepared. Armed IRA Volunteers arrived and a gun battle ensued.
“British troops arrived in jeeps and trucks and took up positions along the Crumlin Road. But it was immediately clear that they had not arrived to defend the people of Ardoyne. A sectarian mob had mounted a deliberate attack but, rather than targeting loyalists, British soldiers turned their back on the mob to fire canisters of CS gas at a community trying to defend itself.
“In the summer of 1970, IRA Volunteers, not the British Army, emerged as defenders of the community.”

A SECOND loyalist attack was underway in the Short Strand, also targeted by bandsmen returning from the same Orange Order parade. Sile Darragh, IRA O/C in Armagh Jail during the Hunger Strikes, was only a child at the time of the loyalist attack on Short Strand but she remembers it as a defining moment.
“The area was already flooded with Catholic families seeking refuge from sectarian attacks.
“A loyalist band stopped at the bottom of Seaford Street to play sectarian tunes and taunt nationalists. Later, an Orange mob looted and destroyed Catholic-owned premises along the Newtownards Road before launching a full-scale attack on the area.
“The Strand must have seemed like an easy target for Orangemen seeking revenge for being prevented from marching through nationalist west Belfast.”
But when the first loyalist shot rang out, it was met with a sustained response from the IRA.
A local IRA unit, supported by other Volunteers from the Belfast Brigade and by the Citizens’ Defence League fought an eight-hour battle from the grounds of St Matthew’s Church and other vulnerable positions to prevent loyalists ransacking the area.
“There was no one else to defend us. It was one of the IRA’s first major engagements,” says Sile.
In defending nationalist areas, the IRA had succeeded where the British Army had failed, much to the chagrin of the unionist regime which demanded a return to ‘law and order’, by which they meant support for the status quo.

A FEW DAYS LATER, the British Army raided the Lower Falls in an effort to disarm the IRA and, after they met resistance, imposed a curfew. During the curfew, which lasted over a number of days, families were held hostage in their own homes and soon basic provisions within the area ran out. The curfew was broken when women carrying bread, milk and other supplies, marched into the Lower Falls in defiance of the British Army.
Robert McClenaghan, a republican former POW, describes the significance of the British Army’s actions and the breaking of the curfew.
“It can honestly be said to have changed the course of Irish history. Before the events of June and July, many nationalists believed the British Army was neutral. During the curfew, their treatment of the people of the Lower Falls showed the British Army to be a colonial force sent in to prop up the unionist junta.”
Three thousand British troops were sent into the Lower Falls, with helicopter support and armoured cars, triggering the first serious engagement between the British Army and the IRA. Four people were shot dead by British soldiers in what was the first shoot-to-kill incident.
“If those killings had been challenged, if those soldiers had been brought before the courts to account for their actions, other massacres – Ballymurphy in August ‘71, Bloody Sunday a few months later in January ‘72 – might have been avoided. In the event, the British Army was allowed to get away with murder and they went on to get away with murder on numerous occasions.”
Events in the summer of 1970 were pivotal. After the Orange pogroms of ‘69, the IRA had reorganised to defend nationalists from sectarian attack.
“By 1970,” Robert says, “it was already becoming clear that challenging the Orange state was insufficient, that British occupation presented republicans with a different colonial challenge and this began to emerge as a national liberation struggle.”