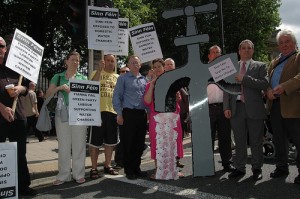 WATER CHARGES proposed by the Fianna Fáil and Green Party administration are more about forcing more taxes on the public rather than conserving water when there is huge waste at source, Sinn Féin has said.

“Everybody acknowledges that clean water is a precious resource which costs money to produce. Indeed, everybody justifiably understood that it was already paid for through their taxes.”

But water meters for every household when it’s reckoned only 16% are said to be responsible for wastage and when up to 40% of treated water is being lost through leaking pipes and poor infrastructure before it even reaches homes is wrong, the Sinn Féin TD said.

“Educating people about the necessity of water conservation and helping families in introducing water-saving technology would be a much more economically sensible approach.

“Water charges are more about creating new tax revenue streams rather than conserving water. It is a regressive form of taxation that will further punish already hard-pressed households.

“We will be mounting a vigorous campaign of opposition.”