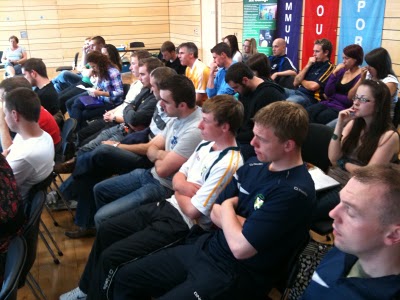 Young activists at 'Our Future – The Republican Alternative'

GERRY ADAMS has told Sinn Féin's National Youth Committee meeting in Dublin's inner city that the Government is doing nothing to address youth unemployment while Sinn Féin has set out proposals to get 50,000 under-25s off the dole, including a specific youth jobs fund to create 20,000 new jobs.

"We cannot stand by and let the skills and ability of these young people be wasted or exported," the Sinn Féin president told the weekend meeting of 60 young activists and organisers at the Ballybough Community, Youth & Sports Centre near Croke Park.

“There is understandable public anger at the antics of people like Fianna Fáil Senator Ivor Callely. But, truth to tell, while there are many good people in politics and public life, Senator Callely is a product of a political culture which encourages behaviour like this.

“This culture of cronyism and privilege is reflected in government policy towards youth. For example, it is cutting funding for Post Leaving Cert (PLC) courses despite the fact that some of these courses provide entry into new growth sectors of the economy.

"What sense does it make to cut funding to colleges of further education, to places like Ballyfermot College of Further Education which has given us award-winning students in areas such as animation and digital media?

“Young people must have a future in Ireland. Young people have a central role to play in changing Ireland and achieving political, social and economic change.”