A challenge for us all that we cannot afford to lose

THE VITA CORTEX OCCUPATION, CORK | ‘THIS IS NOT ABOUT MONEY — IT IS ABOUT JUSTICE’ 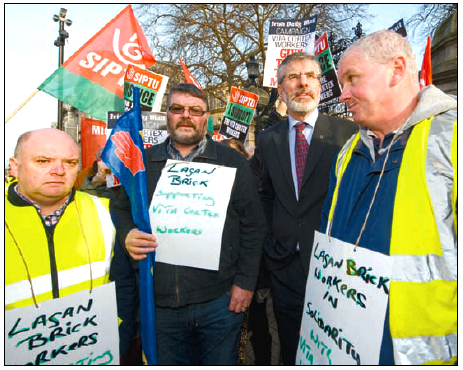 Vita Cortex also represents a challenge for organised labour. It may end up standing as the seminal case by which the effectiveness of the post-Celtic Tiger trade union movement is judged

AS I SIT DOWN to write this, the Vita Cortex workers have entered the 70th day of their sit-in. There have been a lot of words used to describe their story over the past few months, including ‘dispute, struggle and fight’. One word which has not been used as often is the word ‘challenge’. This is surprising since this situation does indeed represent a challenge on a number of levels within Irish society.

In 1984, the battle between Britain’s Tory Government, under Margaret Thatcher, and the National Union of Mineworkers (NUM) represented an ideological battle between socialism and laissez-faire economics. The bitter conflict would determine which of the two schools of thought would determine and dominate the direction Britain would take, not just economically but also socio-culturally, over the next three decades. As a result of Thatcher’s intransigence, the social fabric was torn out of entire communities that had depended, for generations, on the coal industry for their incomes and their identities. Thatcher, in the midst of developing of her own brand of neoliberalism, used the full apparatus of the British Government and associated agencies to smash the spirit and strength of the miners. Her victory was shared not by the ordinary British family but by those salivating at the thoughts of the opportunities that would be afforded to them by a society where consumerism would be diffused as a human value to be held dear. My point is that the miners’ strike (and this has been said many times before) was not simply some huge industrial action. It had a fundamental impact on the shaping of British society.

Fast-forward 28 years and it would also be very wrong to think of the Vita Cortex story as simply another industrial dispute. It in fact poses a challenge for society that should not be underestimated. The ideological landscape has been blurring for quite some time and the global economic crisis has probably played a huge role in intensifying this distortion. For this reason, I would be somewhat uncomfortable in labelling the case as a black and white stand-off between the forces of socialism and capitalism. Also, contributing to my reluctance in this sense is the fact Vita Cortex also represents a challenge for organised labour. It may end up standing as the seminal case by which the effectiveness of the post-Celtic Tiger trade union movement is judged that the workers of Vita Cortex, unlike Thatcher or Scargill, did not begin their fight from an already politicised platform. They simply want what they believe they deserve and what they were promised by their former boss, Jack Ronan. That said, the level of politicisation in factory can•teen has certainly increased given their treatment over the last 70 days.

The dispute may not be indicative of a fundamental battle between traditional ideological perspectives. However, it is exhibitive of a clear, yet sometimes deceptively salient, clash of value systems within Irish society. On the side represented by the Vita Cortex workers are the ordinary men and women of this country who live every day to raise their kids, pay the bills and put food on the table. We don’t ask for much. We don’t seek to dominate or control others. We don’t have agendas or grand designs. We just want to live our lives and be happy. Generally our core values are honesty, respect and inherent appreciation for the trials and triumphs of our fellow human beings. The term ‘salt of the earth’ would probably be evoked if I was to use biblical language. It is amazing that, at a time when ordinary people are being beaten down by austerity measures, untrustworthy politicians and an inequitable political system, their set of values would not only resist dilution but in fact strengthen.

It would seem that on the side of Jack Ronan and [Vita Cortex director] Seán McHenry stand the political and corporate classes. They represent a value system that promotes the belief that people are disposable after they have outlasted their value, commercial or otherwise. They are part of a golden circle that commandeered the mechanics of governance to feather their own nest during the boom years. All this has been brought to bear on the Vita Cortex dispute. The proponents of this value system see an opportunity here. If company owners are allowed to walk away from their responsibilities then they know that they will have a foundation from which to persecute workers by attempting to norm, within society, the policy of not paying redundancy. In fact, they would probably love to totally kill the concept of redundancy and reduce ordinary people to a mere resource to be exploited at will. There is a staggering amount of wealth and influence in our country under the control of this alarming set of values. The point I am making here is that it’s not wealth that separates people but values.

Vita Cortex also represents a challenge for organised labour. It may end up standing as the seminal case by which the effectiveness of the post-Celtic Tiger trade union movement is judged.

For 22 years it has dined at the table of social partnership all the while membership has fallen significantly (in 1980, 55% of the workforce in Ireland was unionised; by 2007, this dropped to 31%). Critics may say that this has resulted in a culture of bureaucracy, a lack of meaningful activism and the concentration of decision-making at the higher levels of the movement. It can be argued that the channels for resolving industrial relations disputes to which the trade union movement has become accustomed have failed the Vita Cortex workers up to this point. If a positive result is achieved in the coming weeks one would have to definitely consider, in any final analysis, other contributory factors to the success.

I say this because the stand of the 32 Vita Cortex workers has revitalised the belief in ‘people power’. This is mostly reflected by the fact that a community has rallied and fought on behalf of persecuted neighbours. The community in Cork has shouldered many of the responsibilities of a union movement which is well financed by the subscriptions of workers to fight these battles. The challenge for organised labour is clear. I am all for the concept of trade unionism but only if the concept is realised in the form of a healthy, representative and functioning trade union movement. From this point on, the trade union movement must get back in the ring and fight in the foreground as well as in the mystical background. More importantly, it must now follow through on the promises made by its leaders to mobilise, on a national level, in support of the Vita Cortex workers.

Futhermore, Vita Cortex poses a challenge for big business in Ireland. There a great many honest and hard-working business owners in Ireland. Many are friends of the campaign and the outpouring of support from small and medium enterprises has been incredible.

There is a challenge for everybody to ensure that this does not happen to anybody ever again. This is not about money. It is about justice. It is time to address the serious bias, embedded within Irish corporate law, against workers. The Government needs to take very active measure to close off loopholes which allow extremely wealthy individuals to hide behind limited liability law. We are not simply for a change in the law. We need a change in the mentality and the architecture of the political and legal system to ensure that ordinary workers are not exposed to this sort of financial exploitation and disgraceful treatment.

We cannot allow the fight of the Vita Cortex workers to be yet another great heroic failure. We have too much to lose. The aim is victory and it will be victory for us all.