Collective effort, not individual greed, is the only way forward 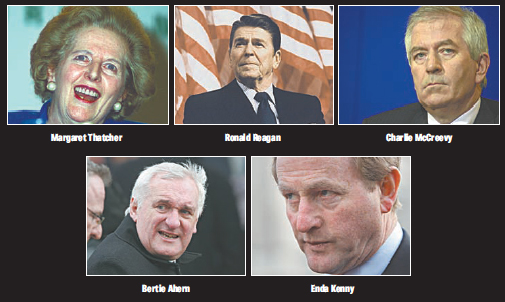 The situation for Greece is that the German banking debt has now been made the Greek debt so that Greece can, if necessary, be safely cast adrift.

WE LIVE in a world of free market economics. And the big theory behind all this is that if individuals are freed from ‘sectional interest’ restraints (which is how the free marketers describe state controls or trades unions) then the economy will flower.

And the Establishment’s response to this collapse, throughout Europe as well as from our native capitalist parties (Fine Gael, Fianna Fáil and Labour), has been to socialise the banking debts on the one hand and to use the crisis to force down wages and working conditions on the other.

As the Irish proverb says, is ar scáth a cheile a mhaireann muid (we live in each other’s shadow). All individuals in our economy and in our society function as part of the collective and the issue really is how the collectively-produced wealth is shared out.

We know, of course, how the burden of solving the bank debt is being shared out. The mass of the population have seen Collective effort, not individual greed, is the only way forward a savage cut in their living standards while the rich have suffered only marginally or not at all.

Despite this, the Government (with Labour participation) refuses to develop a collective economic plan using the state’s resources for job creation. The best they can manage is the pious aspiration of “creating the conditions in which entrepreneurs will create jobs”.

This is why the job creation “plan” (mar dhea) announced with such fanfare last month is so empty of real commitments and, well, plans!

But the Government do have plans: they plan to squeeze the unemployed. The attacks launched by Social Protection Minister Joan Burton (despite the fact that in reality less than one per cent of savings in her department were achieved from cracking down on social welfare fraud) are designed to increase pressure on and harassment of the unemployed so that people will take any job, no matter what wage is being offered.

Note also how, in the Greek situation, the European Central Bank has insisted on the minimum wage being reduced. This reduction will not add one red cent to the Greek Government’s income or reduce its debt but it will increase the profits of the bosses whose friends sit on the board of the ECB.

The same pressures are applying here.

But neither the Government as a whole, nor the Labour Party in particular, can escape from this conundrum because they are totally committed to the ‘European Project’ and can contemplate no alternative to it.

Of course, genuine co-operation between European states for mutual benefit is a good thing, but see how the debts of German and French banks (who lent recklessly to Greece and Ireland, among others) have been ‘socialised’ to the impoverishment of the working people of these and other countries.

Indeed, the situation for Greece is that the German banking debt has now been made a Greek debt so that Greece can, if necessary, be safely cast adrift. The only thing holding the European leaders back is their fear of the knock-on effect of such a move on other peripheral countries like Ireland and Portugal.

But here’s the point: if all the bad things are socialised and can only be resolved through collective national effort, why can’t economic growth be achieved the same way?

The reason is that the people of property, the ones with the big money, would have to share the wealth and that they are not prepared to do.

But sharing is what republicanism is all about, and that’s the only alternative to the crisis and the despair the crisis is generating.