Neck-and-neck between Johnson and Livingstone 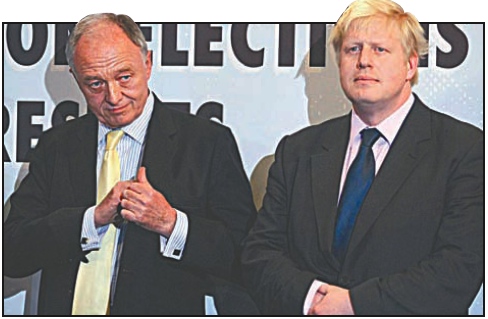 Ken has traditionally done well among London’s Irish voters due to his strong support for the community, establishing the huge St Patrick’s festival, plus his longstanding role in advancing dialogue and the Irish Peace Process.

THE London Mayoral election on 3 May looks set to be a neck-and-neck contest between Tory incumbent Boris Johnson and Ken Livingstone. Polls in January put Livingstone two points ahead following a boost in his support, largely as a result of his focus on the need to cut public transport fares; a February poll put Johnson two points ahead, showing just how tight this fight will be.

Ken has traditionally done well among London’s Irish voters due to his strong support for the community, establishing the huge St Patrick’s festival, plus his longstanding role in advancing dialogue and the Irish Peace Process. In contrast, Boris Johnson created a huge furore among Irish groups after remarks he made in a recent New Statesman interview prompted headlines such as the Irish Post’s front page: “Boris, your attitude stinks”.

In the interview, Johnson claimed: “I’ll tell you what makes me angry . . . spending £20,000 on a dinner at the Dorchester for Sinn Féin.” He was referring to the annual St Patrick’s Day Gala Dinner, initiated by Ken as Mayor and subsequently pulled by Johnson. Contrary to what Johnson claimed, the event was representative of a wide cross-section of Irish society in London, was self-financing and gave any profits to charities. All the Irish political parties, not just Sinn Féin, were invited.

A letter to the Guardian newspaper, condemning the comments, was signed by prominent Irish individuals, including restaurateur Richard Corrigan, actor Adrian Dunbar, MPs and community activists. Many demanded an apology and Communications Workers’ Union General Secretary Billy Hayes commented that his union “has been very supportive of the Irish Peace Process, which recognises the legitimacy of all the communities and traditions of Ireland”. He condemned the remarks as “a poor effort at reviving yesterday’s troubles”. The Irish Post argued in its editorial: “Time is right to reinstate Ken as Mayor”.

As 3 May approaches, many believe this election will be crucial, not only for London but also for Britain’s national political scene. As Cameron’s first big electoral test, a defeat for his party would impact very badly. Equally, a victory for Boris Johnson would do the opposite. Every vote will clearly count and those of London’s Irish — one of the largest ethnic minorities in the city — could prove decisive. Campaigners on both sides point out that nothing can be taken for granted. A support group, Irish4Ken, has been established, attracting a wide range of groups and individuals to mobilise that vote. The deadline to register to vote is 18 April.