Commemoration threatened by loyalists and neo-nazis 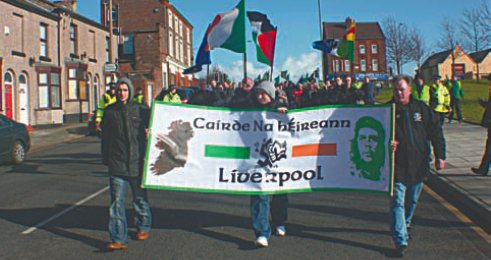 The Cork member of parliament is lodging a formal complaint with the Chief Constable about the police response.

MERSEYSIDE POLICE allowed a mob of 300 loyalists, neo-Nazis, British Army veterans and soccer hooligans from ‘Casuals United’ to block a road and threaten people attending the annual commemoration for a Liverpool-born IRA Volunteer killed at the famous Upton Ambush of 1921.

Sinn Féin TD Sandra McLellan was the main speaker at the event on 18 February to honour Seán Phelan, who was born and raised in the Kirkdale area of Liverpool. The Cork member of parliament is lodging a formal complaint with the Chief Constable about the police response. Cairde na hÉireann Liverpool has urged anyone who was the victim of racist or sectarian abuse and intimidation to use the online reporting system used by Merseyside Police and ensure that ‘Hate Crime’ is highlighted in their report.

Forty loyalists waving Union flags blocked the road at the starting point and a much larger number had occupied the destination of Derby Square. Merseyside Police told organisers of the Seán Phelan Commemoration that they feared that they would not be able to safely police the situation and then threatened to proscribe the event if they did not decide to reroute through the Vauxhall area and end with an outdoor rally at another location.

Cairde na hÉireann will be holding discussions with Merseyside Police, Liverpool City Council, trade unions and anti-racist organisations to ensure that the Irish community’s rights to peacefully assemble and be culturally and politically active are respected and protected in the future. Anti-fascist activists in the region are also reported to be reviewing the situation.