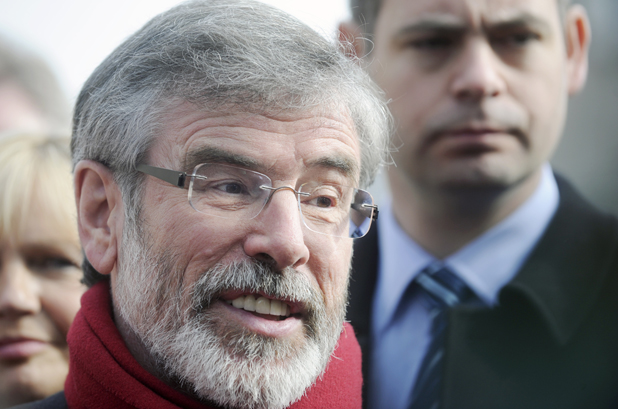 Sinn Féin has the costed, clear-sighted alternatives to the austerity pioneered by Fianna Fáil and being continued by Fine Gael and Labour, who together form ‘The Consensus for Cuts’.

THE Behaviour and Attitudes survey for the Sunday Times shows Sinn Féin support in the 26 Counties jumping four points to 25%, making it the biggest challenger to Fine Gael (32%), ahead of Fianna Fáil (dropping four points to 16%) and the Labour Party down to 10%. (Independents — ranging across the political spectrum from Left to Right — stand at 17%.)

Gerry Adams remains the most popular party leader (46%), with Taoiseach Enda Kenny at 41%, and Labour leader Eamon Gilmore at 34%, just one point ahead of Fianna Fáil’s Mícheál Martin.

While Sinn Féin activists can feel pleased about another poll reflecting the upward trend in public support for the party, republicans are cautious about reading too much into individual surveys.

Opinion polls are not the big issues facing people enduring austerity measures slashing at their incomes, their livelihoods and futures.

The Irish Association of Emergency Medicine has just reported a 700% rise in Crumlin Children’s Hospital of children being treated on trolleys because there’s not enough beds.

Five years ago, one or two children spent a night on a trolley at the hospital; now that figure has rocketed to 13 or 14 every night. Often, children are left longer than 12 hours on a trolley and in some cases over 24 hours. These are historically and dangerously high levels, the emergency medical experts say, as well as being “ethically unacceptable”.

Doctors at hospitals across Ireland are reporting sharp increases in paediatric overcrowding — and they are blaming closures for the crisis.

As this happens, the Fine Gael/Labour Government is continuing its attacks on job-seekers, single parents and those on Community Employment programmes; cutting schools and other hospital and public services; taxpayers already struggling to make ends meet are being hit with new and unfair taxes; more and more family breadwinners are losing or fearful of losing their jobs — and all the while the Government bails out the banks and bondholders and dances to the austerity tune of the EU superpowers led by Angela Merkel and Nicholas Sarkozy.

This is what matters to people.

Sinn Féin has the costed, clear-sighted alternatives to the austerity pioneered by Fianna Fáil and being continued by Fine Gael and Labour, who together form ‘The Consensus for Cuts’.

The challenge of new ways to tackle austerity, stimulate and build the economy and defend public services and people’s living standards is being led by Sinn Féin. We need to make that challenge even stronger.