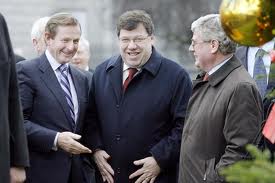 Kenny, Cowen and Gilmore together: Fine Gael, Fianna Fáil and Labour all follow the cuts in services agenda

TAOISEACH Brian Cowen’s exclusion of Sinn Féin from talks on addressing the economic crisis because it has a different view to the “consensus on cuts” shared by Fianna Fáil, the Greens, Fine Gael and Labour has been criticised by Sinn Féin leader Gerry Adams MP.

If the Taoiseach is serious about acting in the national interest then there must be an honest assessment of all the options available to tackle the economic and fiscal crisis, Gerry Adams said, including opposite views to his and Enda Kenny’s.

Measures to confront our present difficulties must, of course, address the Exchequer deficit.

Discussions about how this can best be achieved should include those who take a different view to that of the Government.

The Taoiseach’s decision to exclude Sinn Féin from discussions because the party has a different opinion is reprehensible.

It is ironic that the Taoiseach's exclusion comes on the very day that Sinn Féin launched economic proposals in the North and invited all parties to attend.

Political exclusion has never worked in this country.

Sinn Féin has proposals to cut the deficit but we will not rely on savage cutbacks to do so.

Sinn Féin refuses to be part of a consensus for cuts that now involves Fianna Fáil, the Greens, Labour and Fine Gael.

We are the only party opposing the decimation of frontline services and the punishing of ordinary, hard-working families.

We are also the only party promoting a tax overhaul and an economic stimulus strategy as the way forward.

There is a better, fairer way.

Gerry Adams was speaking in Abbeyfeale, County Limerick, where he opened a new Sinn Féin office.