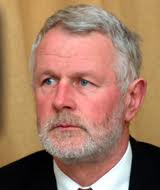 MARTIN FERRIS TD has been selected to contest the Dáil general election constituency of Kerry North/West Limerick for Sinn Féin.

Speaking at the selection convention in Tralee on Thursday night, Sinn Féin President Gerry Adams MP said a consensus now exists between the Government parties and Fine Gael and Labour on savage cuts for ordinary people.

Fine Gael and the Labour Party are onside with the Government’s plan to cut the Budget deficit by imposing savage cuts. That is why yesterday the Taoiseach invited them to pre-Budget talks.

His decision to exclude Sinn Féin from discussions because this party has a different opinion is reprehensible.

It is ironic that the Taoiseach's exclusion comes on the very day that Sinn Féin launched economic proposals in the North and invited all parties to attend.

And why have we been excluded? Because Sinn Féin will not be a part of a consensus based on a 3% Budget deficit by 2014.

Next month, Sinn Féin will launch a Budget alternative to the Government’s policy of slash and burn.

We will outline a detailed, costed stimulus package that can create jobs and help ordinary people.

On December 4th, there will be a rally in Dublin to demonstrate public anger and to keep up the pressure on the Government.

It is time to make a stand.

We can best do that by getting Martin Ferris elected in North Kerry and West Limerick and by returning a strong Sinn Féin team to the Dáil with a mandate to bring about real and fundamental change.