You can still hate Ryanair – Michael O'Leary doesn't like the competition 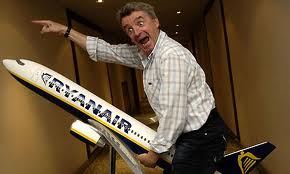 Ryanair boss Michael O'Leary: Not so keen on competition

I HAVE some good news and I have some bad news. On the good side, it is okay to hate Ryanair and run a website with this as your sole purpose. The bad news is that you are not allowed make money from it.

This week, Robert Tyler, a Londoner who set up I Hate Ryanair will have to hand over the domain name to Ryanair after a judgement by Nominet, the British internet domain name registry company which manages the eight-million-plus ‘UK’ domain names.

Tyler, though, has moved the site to ihateryanair.org and you can still merrily check out his many comments and opinions on the Ryanair cheap airline.

Nominet found that Tyler had earned a hardly sky-high £322 from commercial links published on the site – and this is the problem. If you want to run what Nominet calls a “criticism website”, you cannot be “tainted by commercial concerns”. Strangely, it seems it’s perfectly alright for Ryanair to make extra money for having a maze of a website with veiled charges and levies.

Don’t worry, though, if you thought you would be deprived of anti-Ryanair bile online. As well as the I Hate Ryanair migrating to the .org registry, you can also check out Ryanair Sucks and the more sombre Ryanair Campaign.

Who would have thought that Ryanair and CEO Michael O’Leary, whose publicity style is at best abrasive, were so thin-skinned when it came to criticism of their operations.

Finally, I wish to state for the record that I was not tainted by commercial concerns while writing this article. I was, however, thinking a lot about chocolate. Is that okay?