'The Government says it cannot ask bondholders – who understood the risks in the first place – to take a hit on their bad investment but healthcare, education, social welfare recipients, the young and the old can'

Bond-holders and taxpayers and December 4th 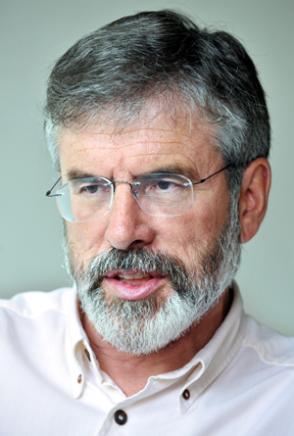 THE cost of the bank bail-out to the taxpayers has been revealed to be an incredible €50 billion! This includes an increased estimate for bailing out Anglo Irish Bank, bringing that figure to €34.3billion, almost 40% higher than the Government had originally claimed. There will also be additional money for AIB and Irish Nationwide Building Society.

The state is slowly being impoverished by the irresponsible decisions of the Fianna Fáil/Green Government. And it is ordinary people who are paying the price of this in jobs lost, homes repossessed and increasing poverty and declining public services.

Having warned that €3billion will have to be taken out of the economy in December’s Budget, Government mGerry Adamsinisters are already warning of more to come next year. The message to those on social welfare, to low-income workers, to public sector employees, and to struggling businesses, is that they must carry the financial and social costs for the mistakes and crimes of others.

With rising unemployment, a fall in taxes and a squeeze on borrowing, ministers claim that the Government has no choice but to cut spending and attempt to close the deficit.

At the same time the coalition has now acknowledged what it denied just a few weeks ago: that the total cost of propping up Anglo will now be €34.3billion.

This is on top of its recent announcement that Anglo is to be broken up into two banks (just what we need), a 'funding bank' and an 'asset recovery bank'. Let's call them the silly bank and the bad bank.

There is much confusion over what this policy actually entails. Apparently the funding bank will hold all the current deposits, and will provide loans to the asset recovery bank, which will actually be insolvent. Do you follow? Even highly-trained economists are scratching their heads about what all this means.

What remains certain is that whatever you call them, however many banks you create, the cost to the taxpayer remains astronomical.

And we ain’t seen nothing yet.

There could be an upsurge in borrowing, costs and NAMA could take up to another €50billion plus.

The current government deficit will be around 32% of GDP.

In Anglo alone, subordinated bond-holders – that is investors who lent the bank money and receive a higher rate of interest in return for being next in line to take a hit after shareholders – own about €2.5 billion of the bank’s debts. It’s not clear how much of this will be re-paid. Repaid by whom? Repaid by you and maybe your children.

Senior bond-holders – that is investors who accept a lower interest rate than subordinated debt-holders on the basis that they are taking less risk – own about €15billion worth of debt. The Government says that, even though these investors are aware of the risk they take when they buy bank bonds, all these investors should be repaid.

There is no doubt that there is a debt to be cleared up at Anglo Irish because of the mess that was caused. Depositors are protected for up to €100,000 of their deposits. Nobody is arguing that these savers should lose out.

However, it’s the other debts mounting up at the bank and the Government’s insistence in honouring them that is raising the most questions.

At the same time as the Government says it cannot ask bondholders – who understood the risks in the first place – to take a hit on their bad investment, it has no qualms about telling Irish taxpayers – who bear no responsibility for the banking mess - that another a minimum of €3billion must be cut from the annual Budget in December.

Banks cannot suffer but healthcare, education, social welfare recipients, the young and the old can.

The Government says that Anglo must be wound down in a long and expensive process so as not to upset international lenders.

The Greens appear to be unhappy with this but have done nothing constructive to address the issues involved.

Everything about how Anglo has been handled and is being handled stinks to high Heaven. From the lack of prosecutions of its former directors; to the high salaries it is paying those in charge now; to the appointment of members of its recent board, like Frank Daly the former Revenue Commissioner, to NAMA; and finally, to the refusal of the Government to come clean on who holds the bonds in Anglo that it is insists have to be honoured.

According to a recent article in the New York Times:

Can one bank bring down a country? Anglo Irish Bank, the midsize Irish lender whose profligacy has come to symbolise the excesses of the real estate bubble here, is doing its best to find out.’

(Your man tells me that ‘profligacy’ means ‘recklessness; wastefulness; licentiousness and decadence’ – and it was certainly all of these!!)

So, the solvency of the state and the well-being of four and a half million citizens is at risk because of the corruption of the banking services and the failure of this and previous governments to properly manage and regulate the banking sector.

The North also is affected by this. Allied Irish Bank has put its First Trust Bank up for sale and NAMA now owns many developments, particularly in Belfast.

The reality is that this government is out of ideas and out of time. It has no viable strategy to get people back to work or to turn the economy around. Fianna Fáil and the Greens have to go.

Sinn Féin is holding a rally in Dublin on 4th December to protest against government policy in advance of the Budget. Join us there. Make a stand.