THE war on Afghanistan has gone on now for nine years. To mark the event, the Peace & Neutrality Alliance and Shannonwatch are organising a demonstration at the Shannon Airport Roundabout on Sunday, October 10 from 2pm to 3pm.

PANA held its first demonstration at Shannon Airport against the war in May 2002. Since then, thousands of Afghans, US and other soldiers from its vassal states have died in this unwinnable war. It's only a matter of time before one of the Irish soldiers fighting in that war is killed or injured.

PANA again calls for the end of the war, the withdrawal of all foreign troops and the termination of the use of Shannon Airport in that war.

An independent survey in 2007 by Landsdowne Market Research (see illustration below) shows the Irish people do not support the war and we are convinced the numbers against the war is even greater now. Recent surveys in Britain, for example, showed that over 70% of the people in that country wanted its troops withdrawn.

The media just cannot continue to ignore the war and those like PANA that have opposed Irish Government support for it from the beginning.

What the people want is jobs at home and no war abroad. 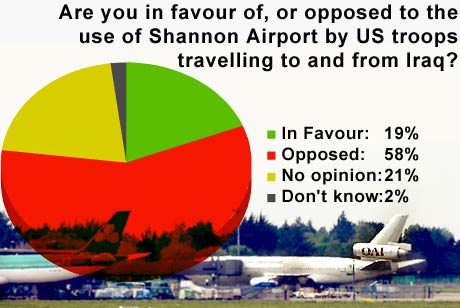