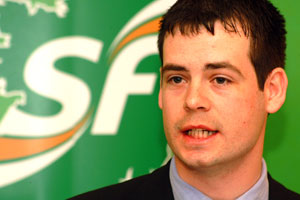 GERRY ADAMS, Mary Lou McDonald and Caoimhghín Ó Caoláin will all be attending this Sunday’s Sinn Féin Dáil general election convention for Donegal South-West. Senator Pearse Doherty (pictured) is the only nominee for the candidacy.

Commenting ahead of the event, Senator Doherty said:

With the High Court hearing on October 18th fast approaching, I have spoken to my legal team and I more confident than ever that the Government will be forced to live up its constitutional responsibilities and allow the people of Donegal South-West to go to the polls.

With one of the highest unemployment rates in Ireland, the people of Donegal need and deserve equal representation in Leinster House.

I will be seeking my party’s nomination on Sunday to offer an alternative vision to the failed politics that has abandoned Donegal for so long.

The time is right for new republican politics in this county and I look forward to the campaign ahead.