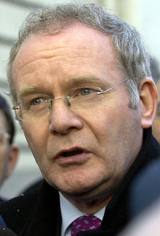 THE British Government has to honour its commitment to a ten-year capital programme for the North of Ireland, deputy First Minister Martin McGuinness MP said before he headed to a Conservative Party Conference fringe meeting in Birmingham on Tuesday.

Let me be very clear: Sinn Féin will oppose the unfair and unjust proposed cuts by the British Government. Our position remains that we must grow our economy, protect those most vulnerable in our society, and ensure that we work to meet the requirements of those in most objective need.

The remarks by Secretary of State Owen Patterson over the weekend run contrary to the commitments made by the previous British Government which were instrumental in the establishment of the institutions.

The reality is that the responsibility for the ten-year capital programme agreed by Gordon Brown during his time as Chancellor now rests with the current coalition government. Both the British and Irish governments are co-guarantors of these agreements. The Irish Government are honouring their commitments; it’s time the British Government did likewise.

I will be making it clear once again – as Peter Robinson and I did during our meeting with George Osborne last week – that the North’s economy is unique and needs careful management as we make our way through the current economic recession.

We must begin by rebalancing the economy by growing the private sector, particularly small and medium-sized businesses. In line with many governments in Europe and in the US, we need a strategic approach which invests to save jobs, tackles waste and inefficiencies and promotes investment in infrastructure and tackling disadvantage.

The Executive requires the necessary fiscal tools to tackle the economic crisis. These must include tax varying and borrowing powers.

The remarks by the British Secretary of State run contrary to this and are unacceptable in terms of standing up for the citizens of the North. Owen Patterson would do well to remember he is no longer an opposition MP but a Government minister with obligations to meet.

There is a need to redress the inequalities that undermine the political progress that we have made to date. Sinn Féin is committed to the full implementation of the Section 75 Equality measures and in particular how this is applied in regard to public expenditure.