More than just a stadium 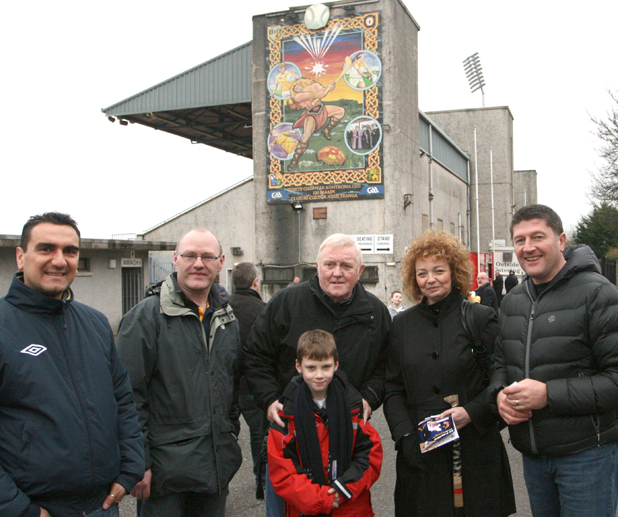 I took my turn and relished the experience. Not only to play for your team but to play a part in the life of your community. That’s what the GAA should be about.

McATEER’S FIELD was our Colosseum. On the shores of Lough Neagh, this was the home of Creggan Kickhams GAC. Behind the goals at one end was McLarnon’s grocery store. On the far sideline, was a stone tearmann cross, marking the boundary of the ancient monastic settlement at Cranfield connected with St Olcan.

The pitch itself was as untamed as most of the adjacent farmland. The surface was uneven. The goalposts were like telephone poles. On a good day, the grass was cut. But every time you ran onto it with a green and gold Creggan shirt on your back was a moment to savour.

The pitch was the muster point for a rural community ensconced along the loughshore between Randalstown and Toome in southwest Antrim. Cousins, uncles, and even brothers would line out together for Creggan. This was the townland of my mother’s birth. So when the time came, I took my turn and relished the experience. Not only to play for your team but to play a part in the life of your community. That’s what the GAA should be about.

Like many other local clubs throughout the 32 Counties, Creggan has always had to be resourceful to improve its own facilities. In 2008, a new full-size pitch along with a new 3G pitch and clubrooms was opened. When the chance came for me to line out on the new pitch with former teammates, I blazed a trail to the official opening.

Building sport, especially our national games, means building proper facilities. It means lifting ambition. That doesn’t have to be at the expense of our ethics and ethos. On one hand, we now see a trend for naming sports stadia after business investors. On the other, the danger of political opportunists hijacking our sporting heritage is very real.

Who can forget ‘The Bertie Bowl’?!!

It was the ancient Greeks and Romans who first developed this concept of giving sport its own stage. Built in ancient Rome almost 2000 years ago, the Colosseum must still be the most iconic and infamous example of this. Although it may be little more than a tourist attraction today, it once staged everything from gladiatorial contests to drama in front of 50,000 people. In Athens, the first modern Olympics were hosted in 1896 in the Panathenaic Stadium. That historic stadium still stands, crafted skilfully entirely from white marble.

The legacy of the Greeks and Romans still prevails. The most recent reminder is the Olympic Stadium constructed for the events in London of summer 2012.

We have our own Colosseum in Ireland: Croke Park. It is in fact the world capital of Gaelic games and has its own distinctive legacy. From Hill 16, built from the rubble of the Easter Rising, to the Hogan Stand, named after the captain of the Tipperary team shot dead by British forces during Dublin’s Bloody Sunday. More recently, it has hosted international rugby matches and even a friendly match between the PSNI and Garda Gaelic football teams. All of this is part of its uniquely Irish legacy.

A stadium can become an expression of culture in itself. It can be a physical declaration of intent. That’s why one of the most important decisions in recent sporting history is the proposal by the GAA to redevelop Casement Park. In mid-February, the Ulster Council in Armagh and the National Management Committee in Dublin accepted a letter of offer from Sports Minister Caríl Ní Chuilín to build a new 40,000-seater stadium in west Belfast.

That progress has only been made possible because Sinn Féin has used its political strength in the local Assembly to help to secure £61.4mllion for a new provincial stadium for Gaelic games in Ulster. It represents the biggest single public investment in the history of Cumann Láthchleas Gael in the Six Counties. The GAA is also to commit about £15million to redevelop Casement Park. It is a vindication of the importance of Ireland’s second city in the cultural and sporting life of the nation.

For Gaels across Belfast, it means much more. It is a chance to cast off the history of oppression where Casement Park was once occupied by the British Army. It is the hope of an economic stimulus to contribute to transforming the quality of life for the people of west Belfast. More than this, it is the chance for young people from areas where inequality is ingrained, to take the field as equals to their counterparts from throughout Ireland.

Redevelopment of Casement Park is an investment in the unique cultural and sporting wealth of our country.

A stadium with that legacy is more than value for money.