Spare a thought for Brian Lenihan 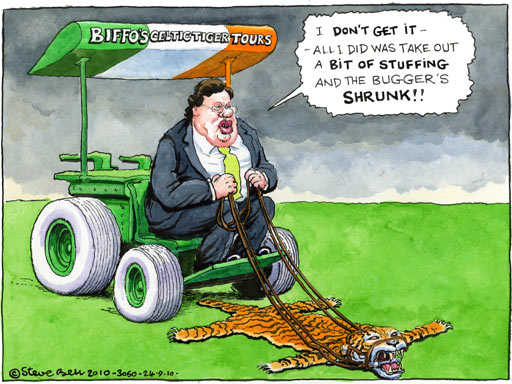 SPARE a thought for Brian Lenihan this week. Shouldering the ailing coalition, saving the economy (or not) and now taking on the international media.

There is a tendency to paint black-and-white pictures, to overstate difficulties, to use sometimes emotive language. And, God knows, our problems are bad enough without exaggerating the reportage to present doomsday scenarios.

The Wall Street Journal reported Lenihan’s remarks online, adding another bit of his quote not carried in The Irish Times. Lenihan also said:

Media reports here are beamed around the world and can influence the decisions of foreign investors and multinationals.

Maybe Lenihan was taking a lead from Brian Cowen, who complained about media “word games” and “defeatism” in the now-infamous September 14th, Morning Ireland interview.

However, it seems that his words had come too late.

What must Brian have thought of another article in that day’s paper titled ‘Irish crisis shows folly of cuts, says Labour’. Accompanying the article was an analysis from Larry Elliott headlined ‘An overdose of austerity hasn’t provided a cure’.

Even though Central Statistics Office figures showed a decrease in economic activity. Lenihan was still proclaiming a “turnaround” in the economy.

This was not quite how the Financial Times reported it.

The prime minister battles to restore investor confidence as Ireland’s cost of borrowing hit record highs this week over its ability to finance the budget and recapitalise its ravaged banking sector.

Finally, what will Lenihan think of David McWilliams, reported in this morning’s Belfast Telegraph as saying:

For me, as an Irish citizen, this is like watching a slow car crash.

Perhaps more of a roll-over than a turnaround.